The word mariachi, originally meaning simply musician, was first recorded in the language of the Coca Indians in 1529 at the time of the Spanish conquest. The Spanish friars soon taught these Indians, who at that time had a five-tone system for music, the twelve-tone system. Also introduced to them were such European instruments as the harp, violin, and guitar. Throughout the 1600's, the people of the Coccula region of Meixco combined the new instruments of the Spanish conquerors with prehistoric ones such as the chirimias and wooden drums. The mixing of these two cultures and the combination of their music played an important part in their lives at this time.

Music, including that played by mariachis, became a unifying symbol in the fight for Mexican independence from 1810 to 1821. The most common instruments in a mariachi during this time were the harp, one or two violins, drums flutes, and a guitar or guitar variant. Placido Rebolledo led one of the earliest documented mariachi ensembles, around 1840. This group consisted of a harp, two violins, and a guitarra de golpe (rhythm guitar). Ten years later, Amado Vargas led an ensemble consisting of those same instruments. This marked the beginning of the modern mariachi ensemble. Vargas's son and grandson would shape the mariachi tradition in years to come. A brighter sound developed in the 1800's when the trumpet was added and the guitarron (bass guitar) replaced the harp. Also added were the vihuela and more violins, which doubled the size of the mariachi.

Contemporary mariachi ensembles still feature violins, trumpets, guitars, guitarrones and vihuelas. The vihuela is vital to the rhythmic section of the mariachi. The mariachi vihuela differs from the European vihuela of 16th centuries. The mariachi was specifically designed in the sixteenth century for mariachi music. The vihuela has five strings, tuned: a-d'-g'-b-e. Though the instrument looks extremely similar to a guitar or a small guitar, the vihuela is remarkably different. The vihuela has a raised or ribbed back, which allows more resonance to the sound and it is typically much smaller than a standard guitar. The vihuela adds harmony and a unique sound that is imperative to mariachi music. All of the instruments within mariachi music are crucial to the specific authentic sound.

Tucson is very rich in Mariachi and Mexican culture. Every spring the annual Bank One International Mariachi Conference is held in Tucson. This year, Bank One will be celebrating their 21st year of producing the Mariachi Conference. The conference, which was started in 1983, was created to educate and entertain the city of Tucson with its Mexican heritage. Bank One's goal has been to preserve folkloric music, and they have accomplished this task through their International Mariachi Conference. The five-day event features concerts and workshops for people of all ages. Bank One also awards nearly 100 workshop scholarships to students across the country during the conference. Mariachi Cobre, Angeles Ochoa, Mariachi Los Arrieros, and Mariachi Vargas de Tecalitlan are just a few of the wonderful ensembles that have been featured in performance during the event.

The only thing more Mexican than tequila is mariachi music and some might consider it a shame to have one without the other. Mariachi goes beyond music; it is the sum of a cultural revolution expressed through a group of musicians, dressed in popular clothing (most recently charro suits) which encompasses the essence of Mexico and its people. It is something cultural, spiritual and traditional that is unique to this country, an experience not to be missed.

The word mariachi refers to the musicians now commonly seen in restaurants or strolling the streets, dressed in silver studded charro suits with wide brimmed hats playing a variety of instruments which include violins, guitars, basses, vihuelas, and trumpets. Their songs tell stories about machismo, love, betrayal, death, politics, revolutionary heroes and even animals. The mariachi originated in the southern part Jalisco state in Mexico sometime in the 19th century. No one is sure where the name comes from, although a variety of theories circulate.

The origins of the mariachi itself (the group, culture, music, etc.) are not much easier to trace. The mariachi is the sum of a cultural evolution which has taken place over the last century or so in Mexico. Although the indigenous tribes of Mexico made music with flutes, drums and whistles, there is no clear link between the indigenous music and the mariachi. The instruments originally used by the mariachi were those introduced by the Spaniards including violins, guitars, vihuelas, and harps. These instruments were intended to be used during masses but the criollos (Mexicans of Spanish descent) began using them to make popular music as well, much to the chagrin of the priests, since they were used to accompany some of the more scandalous, satirical or anticlerical couplets of the times. Mariachi music thrived with the support of the people. The criollos of the 19th century emphasized home-grown Mexican traditions version Spanish ones, and in so doing, supported mariachi music.

Mariachis could be seen wearing traditional workmen's clothes - white pants and shirt and a straw hat - and traveling around looking for work. Most commonly they would find employment at any of the haciendas (ranches) where they would earn more than the average laborer. With the revolution, many of the haciendas were forced to let the mariachis go. As a result, these musicians traveled from town to town singing songs of revolutionary heroes and enemies, carrying news from one place to another. Still not enjoying the same position they had previously enjoyed, the mariachis took to playing in public venues for a fee. One of the most popular venues was San Pedro Tlaquepaque in the state of Jalisco, a fashionable place for the residents of Guadalajara to spend their summers.

Since mariachis were playing for a fee they were forced to add new elements to their music and to expand their repertoire to include waltzes and polkas. By the early part of the twentieth century the mariachi began to regain its popularity. The most prized of the mariachis were still those from the state of Jalisco, particularly the areas of Cocula and Tecaltitlan.

With the advent of radio and television the popularity of mariachi music continued to grow. Recording contracts were signed and mariachi groups were paired with famous singers like Jorge Negrete and Pedro Infante. Due to the popularity of jazz and Cuban music the trumpet was added, pushing the violins into second place and, in some cases, replacing the harp. Movies were made which represented Mexico as a place populated with truly macho men whose lives revolved around the charro, tequila and, of course, the mariachi.

Today, mariachi music is played around the world in places as far away as Japan and Europe. This integral part of Mexico's culture and history is celebrated each September in its birthplace, Jalisco.

Visit these websites to learn more

Folklorist Big Jim Griffiths tells us about the history of Mariachi music.

People will tell you Tucson is a Mariachi town. They are right. It is big here, there are a lot of fine Mariachi groups. There have been for a long time some tremendous bands that created a continuity of the music here. We have the Mariachi festival every year. Mariachi music isn't native to this part of the world. It was brought here, it's a post World War II import into Tucson. It comes from the homeland of the State of Jalisco in Mexico, the area near the city of Guadalajara. It is folk dance music of that part of Mexico. Nowadays it is played with lead instruments of violins and trumpets and the rhythm instruments of guitar, a little guitar with five strings and a huge six-string guitar. The trumpets were probably added in the 30s. The older Mariachi style was just violin and three guitars and sometime a harp in there, too. You can accompany almost any kind of play almost any kind of tune on Mariachi. But the core repertoire of the Mariachi group is a dance tune. For the men and women separate facing each other, folk dance of that area. I'm going to play you, to end this segment on Mariachi music, a tuney bit of the oldest Mariachi recording that anyone knows about. It's a group from the town which it is named for. They recorded around 1910. I happen to have this nice record playing a song which is still played. Let's listen to the oldest sound of Mariachi we really have available to us. 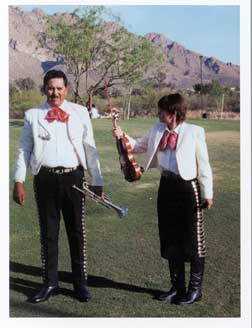 Writer, musician, and University of Arizona English instructor D. R. Ransdell has created Diana canta la venganza (Diana Sings Revenge), containing eleven original mariachi songs. She has gratiously given permission for streaming these two as part of the Music of the Southwest Mariachi section. Read an article about D. R. and her music in the March 20, 2003, Tucson Weekly. Visit D.R.'s website for more information about Diana canta la venganza and D. R.

Part of which site
Music of the Southwest