In the Steps of Esteban

DUNBAR SCHOOL: Shared Memories of a Special Past

DUNBAR SCHOOL
Tucson, Arizona
1913-1951
On Monday, September 18, 1913, classes began at Dunbar School, Tucson's first school of children of African descent. Mr. Cicero Simmons, a graduate of Booker T. Washington's school at Tuskegee, Alabama was hired as Dunbar's first principal earning a salary of $90 per month. Mr. Morgan Maxwell, Sr., replaced Mr. Simmons in 1940. During the course of the thirty-eight years of the school's history it underwent three name changes. It was know as the "Colored School" in 1913, Dunbar Junior High in 1917, and after segregation of Arizona schools was ended in 1951, it was renamed John A. Spring.

A collection of oral histories titled "Dunbar School: Shared Memories of a Special Past" is also available. 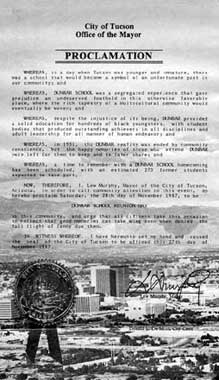 City of Tucson,
Office of the Mayor

WHEREAS, in a day when Tucson was younger and immature, there was a school that would become a symbol of an unfortunate past in our community; and

WHEREAS, DUNBAR SCHOOL was a segregated experience that gave prejudice an undeserved foothold in this otherwise favorable place, where the rich tapestry of a multicultural community would eventually be woven; and

WHEREAS, despite the injustice of its being, DUNBAR provided a solid education for hundreds of black youngsters, with student bodies that produced outstanding achievers in all disciplines and adult leadership for all manner of human endeavor; and

WHEREAS, in 1951, the DUNBAR reality was ended by community conscience, but the happy memories of those who attended DUNBAR were left for them to keep and to later share; and

WHEREAS, a time to remember with a DUNBAR SCHOOL homecoming has been scheduled, with an estimated 270 former students expected to take part,

NOW, THEREFORE, I, Lew Murphy, Mayor of the City of Tucson, Arizona, in order to call community attention to this event, do hereby proclaim Saturday, the 28th day of November 1987, to be

in this community, and urge that all citizens take this occasion to reflect that good memories can take wing even when denied the full flight of fancy due them.

IN WITNESS WHEREOF, I have hereunto set my hand and caused the seal of the City of Tucson to be affixed this 27th day of November 1987.

Part of which site
In the Steps of Esteban