The Promise of Gold Mountain 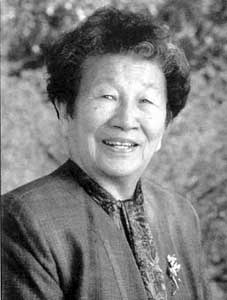 Historymakers™ are men and women who have distinguished themselves with noted achievements in diverse areas of who have maintained their ties to Arizona. Members of the Central Arizona Chapter of the Arizona Historical Society nominate living men and women. The names are submitted to a panel of notable Arizonans, who are of diverse backgrounds, for final selection. The ceremony is March 1, 2003 at the Marriott Camelback Inn, Scottsdale. The following is taken from the 2003 Arizona Historymakers™ Gala VII Program March 1, 2003

Esther Don Tang is a dynamic community leader and successful businesswoman. Born in Tucson, she grew up working in the family grocery business where she learned about hard work, loyalty and community service.
Her father came from China to America in about 1900. He came to Tucson working as a chef for the railroad. After about three years in Tucson he returned to China to find a bride. It was arranged for him to marry an eighteen year old girl from a wealthy family. They thought their daughter was coming to America, or Gold Mountain as they called it, to live a life of luxury. Instead, Tang's mother helped her husband operate a grocery store in Tucson and raised a family of ten children.

Esther recalls that her parents taught their children to take pride in their home and that the outside community is "also your home and you're going to be working out there doing business so you should work to improve it." The children were also taught to be on their best behavior because, "Everything you do reflects on your family."

Esther Tang says she grew up as a tomboy, and learned to speak Spanish playing with the Mexican neighborhood children. Her parents sent her to Chinese school to learn to read and write Chinese and she regrets not being a more serious student of her parents' language. Esther graduated from Tucson High School and attended the University of Arizona. She studied nutrition and sociology, planning to help people in China. Instead, she met and married David Tang and they built a prosperous chain of grocery and drug stores in Tucson.

Like her parents, the Tangs worked long hours, cooking and eating their meals at the store. They raised their four children to help out in the business after school. Esther also found time to volunteer for a wide variety of community causes and organizations, including the YWCA, the Democratic Party and the Catholic Church. She recalls writing speeches on grocery sacks or butcher paper while running the grocery store.

In the 1960s, the Church opened the Pio Decimo Neighborhood Center where Tang served as director for twenty-five years. She helped develop after-school programs for children and practical life-skill classes for adults. They even had classes to teach the U.S. Constitution so that some of the migrants could become American citizens.

Tang's Tucson home is filled with momentos and awards for her many years of service to her community. In 1999, Tang had the honor of introducing President Clinton when he visited 'Tucson. She remembers her surprise when she got a call from the White House. At the rehearsal at the Tucson Convention Center, the secret service had a two-step platform constructed for Tang to stand on behind the podium so she could be eye-to-eye with Bill Clinton when she welcomed him. In 2002, a portion of the new Learning Services Building at the University of Arizona was named for Esther Don Tang.

Tang says that her family has experienced a good life in Tucson. "People have been very good to us and we've tried to make it a better community." She keeps her family close to her with weekly Sunday dinners. She says the family continues to grow and the dinners have become a sort of "United Nations" as her children have married and added grandchildren.

Tang's energy and enthusiasm for life is an inspiration to the next generation. She believes, "A person should never do any kind of work unless they're happy in it, that's the only way you're going to succeed. So I say, never do anything unless you enjoy it and then you grow with it." As a community activist, Tang continues to promote diversity and tolerance of age, ethnic and religious differences. She is diminutive in stature, but her achievements for the Tucson community stand tall.

Part of which site
The Promise of Gold Mountain