I was born in Jonesville, Texas and lived there, and in the Marshal, Texas area until I was eight years old, when my father moved the family to Tucson in search of work. We settled in the Menlo Park barrio when my Dad, Charlie Collins, got a job as an operating engineer. He was a truck driver and heavy-equipment operator for San Xavier Rock and Sand. Then, he was a Teamsters Local Business Agent for a few years.

My father was born in Joplin, Missouri around 1912. My mother, Cloe Elizabeth Mullins, was born in Pounz, Virginia around 1913. They were married in Missouri and had two boys. I was the first born.

Besides the regular household chores as a kid, I worked for the Old Pueblo Bowling Alley as a pin boy. I attended Menlo Park Grammar School, then Roskruge and then Tucson High.

Since grammar school, my best friend was Raul Babasa. We were inseparable, although he was ahead of me in school. In high school, we had a green Model "A" roadster with a rumble seat. He was very outgoing and popular with both the girls and the boys. Mr. Greer the football coach and P.E. teacher, was always on his case. The coach hated for "Babe" (Babasa) to call him by his first name, Jason. "Babe" would tease him from afar and Mr. Greer would get even with him by catching him in the shower with a wet towel.

Babasa and I were among the first to join the "E" Company Marine Reserves here in Tucson. When we were activated for the Korean War, we were both working for San Xavier Rock and Sand. I had gotten him a job there. At Pendleton, I was classified as a tr uck driver and assigned to Motor Transport. Babasa wound up with heavy equipment as a grader operator. Over in Korea, we only saw each other two or three times. I landed with Charlie Company, 1st Motor Transport at Inchon. Maintenance was my main duty. I drove a wrecker most of the time. We moved around a lot in Korea. I was usually bringing up the rear with my wrecker at the end of the convoy.

I was in Hagaru-Ri when the Chinese got into the action. It was hell getting out of there. I saw a lot of killing.

Seeing the guys from Tucson was always a morale booster. I used to see quite a bit of Tom Price, Al Felix and Jimmy Ward.

The real shocker came when Raul Babasa was killed on February 28, 1951! I took it real hard. I still relive the times we spent together from grade school on. I remember going home with him after school and eating his Mom's tortillas and her great Mexic an food. The way he would teasingly hassle with the guys and then hide behind me. I don't know if they were afraid of me or just didn't want to hurt me.

You know, "Babe's" body was on the same ship that brought me back and I didn't know it. I was home for his funeral. I served as one of his pallbearers.

When I was released from active duty, I went back to work for San Xavier Rock and Sand until the company was sold. Eddie Arrow, who sold San Xavier, started his own construction company and I went to work for him. Then, when he closed down, I went to w ork for New Pueblo, then for Corn, on to Compton and then back to Corn, from where I retired.

My wife (Helen Bermudez) and I lived in the Broadmoor area on Croyden Street while our two kids were going to school. Then we moved to Flagstaff where we lived for twelve years. After that, we lived in Benson for ten years and we recently moved with my daughter, Linda, back to Tucson because of my disability from cold injury in the Korean North.

Belonging to the "Chosin Few" organization has helped me understand why I lost my leg and fingers on my left hand. It seems that the exposure to that extremely cold weather comes back to haunt you after all these years. I've put in a claim for compensation over a year ago but haven't heard anything from the Veterans Administration yet. 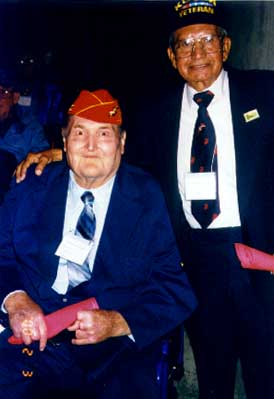 April 7, 1998: I've just come back from Tucson Medical Center, the hospital where I visited Earl. He is convalescing from surgery on his remaining leg. He had already lost his big toe but now it was necessary to amputate his left leg below the knee, the tragic results of cold-weather damage, not diabetes. Being the brave Marine that he is, he is taking it all in stride. He claims that because he was so big (6' 5"), he has to die a little bit at a time.

On the subject of bravery, "Tiny" was awarded the Bronze Star with "V" for valor in the Chosin Campaign. He never bothered to mention it in our interview. Coming down from Koto-Ri on one of the Chinese ambushes, some trucks were destroyed and were burning and blocking the road. Without regard for his safety, "Tiny" took his wrecker, and amid the hail of enemy fire, cleared the road, allowing the convoy to continue. In all modesty, he claims, "It was my job."