I was born in Tucson, Arizona on December 12, 1930. As a kid, I lived on East 19th Street and also close to downtown in the Menlo Park Barrio.

My Dad was a WWII disabled war veteran. He worked for the City of Tucson Sanitation Department prior to the war. He provided well for the family. I never wanted for much and had a normal childhood. Got into some mischief here and there, but nothing serious. For instance, got into the neighbor's yard and picked the fruit off his fig tree. But, then, just about all the kids would do stuff like that, so it wasn't a big deal. I wasn't a juvenile delinquent, ... but only because they hadn't been invented yet!

There used to be a man, rather pint-size, who drove an old Ford Model A around town. He had to use a bunch of cushions in order to see over the steering wheel. He always had his left elbow sticking out the door window. It looked like he was hanging on to the door rather than sitting down. We all knew him by the nickname of Tripitas (Little Tripe). That's the same nickname they hung on me because, as a kid, I was much smaller than the rest. Now that I'm more or less normal size, it has been shortened to Tripas . I could have done worse... in my day, every kid, had a gang-given moniker, some you couldn't use in front of your mother.

You ask about the games we played. You mean like "Spin-the-Bottle?" Well, we played the usual kid games. No innovative games ... just the ordinary stuff.

I joined "E" Company because it was the thing to do. All my friends were joining. I attended a couple of summer camps. I was out of high school in 1949 and when "E" Company was activated in July of 1950, I was in San Diego with my folks. They were thinking of moving out there. I reported back to Tucson and after that, I can't remember much except boarding ship at San Diego and heading for Kobe, Japan. I was in "Dog" Company, 2nd Battalion, 1st Marine Regiment, which was sent, to Camp Otsu to prepare us for the Inchon Landing. "Silver Dollar" Leon, Raul Reyes, "Blackie" Moreno, "Güerito" Leon, Manuel "Seven" Moreno and Ruben Moreno, were some of Tucson's "E" Company members that I remember were in the 2nd Battalion with me.

Next thing I remember was riding an amtrack off the ramp of an LST and going around in circles until we got the word to head for the beach. I recall an LSM rocket ship coming up behind us and opening up with salvo-after-salvo of rockets heading for the beach in front of us. I was really impressed. Then, all that soot from the rockets started falling on us. The amtracks got stuck in the mud before we reached the sea wall and we had to jump over the side and wade ashore. One of our sergeants was the first to go over and he became our first casualty when he was shot and killed.

I thought I was going to drown when I sank into the mud with the weight of my BAR and all the ammo I was carrying for it, but I managed to break free and stay afloat all the way to the sea wall.

Bobby Leon ("Silver Dollar") was supposed to mark the trail for whoever was coming after us, so he was carrying an armload of signs with him. He hooked his foot on something and went head-over-heels, scattering signs all over the landscape! Now, I think about how comical it was, but at that time, it was no laughing matter. As nervous as we were, we thought he had been shot!

It's amazing how little I remember of the fighting toward Seoul until we got to the tire factory in YongDongPo. I remember being strafed by an airplane and diving under a machine for cover. Lt. "Bugsy"" Foor was diving for the same machine, too. " Garcia, go find another place! " I replied, " Chingate, Bato! " (English translation,, "The heck with you, Sir!")

I also remember this Marine looking out the window and getting, shot in the neck. He grabbed his neck and bent over, going 'round and 'round until he landed on the floor, where the corpsman took over.

There was always a lot of confusion in and out of combat action. Now the confusion is in my memory. Going through Seoul, house-to-house fighting, was even worse. Every time you walked into a building, you didn't know if you were going to walk out and when you walked out, you didn't know who would still be around.

I remember seeing a North Korean run up a one-story staircase and disappearing through a big door. "Chief' Oberg (Sgt. Augustine Oberg) ordered me to go after him and I gave him a "Chingate, Bato!" His size eleven boot gave me a two-step flying start that got me all the way to the door! I looked through the door's broken window and saw a North Korean across the way and fired at him, but missed him and he promptly disappeared. I figured I was making too good a target at the top of the stairs so I ran down. Oberg asked if I had gotten him and I lied "Yeah!" "Good man," he says.

By the time we got through Seoul, I already had two Purple Hearts and almost three to my credit. First, I had taken some grenade fragments on my arm and behind my ear. Then, three days later, I took a ricochet on my arm. I refused to be evacuated both times, mainly because I was afraid of being separated from my buddies and maybe wind up in another outfit. Besides the wounds were minor. My almost three Purple Heart was a hit I took coming around a hill. I felt something warm running down my leg! I thought, "Oh, Boy, I really got it this time! My squad leader Jack Underwood, came running to me and I asked, "How bad is it?" "Hell, Garcia, you got shot through the canteen! That's water running down your leg!"

I turned myself into a field hospital when my first wound got infected and I was running a fever. I was given a cot next to a guy that had stepped on a mine. He looked like a mummy, all wrapped up. I thought I had awakened myself in my delirium, talking to myself, but it was the guy next to me, having a bad time. It didn't look like he was going to make it. Watching him die was hard to take, so I took off, in search of my outfit.

Going back to Sgt. Oberg, he used to get some weird ideas. At Wonsan, he got the notion that our sleeping bags could accommodate two men. So, he made me get in and then tried to get himself in there, too. When he couldn't, he got mad and stormed out of the tent. But you know something, I was sure glad we had him around.

He was a stickler for making us dig a good foxhole at the end of each push. The man was fearless! He'd walk around, checking us out, even when there was firing going on. Sometimes I just didn't have the energy left to do any digging, then I'd hear a round go by and it was amazing how my aching muscles would come alive! "Bobby" Leon and I usually shared a foxhole and I can remember when we arrived at Koto-ri, where we dug in on that riverbed that was frozen solid. We'd take turns, clanking away at the ground and getting nowhere! I'd cuss at the frozen ground, the war, Korea, the cold wind, President Truman and even the Corps. Then, I would throw my entrenching tool down and take a breather. "Bobby" would pick it up and go through pretty much the same routine. Then, we wound up cussing each other out! About that time, we heard a fire fight break out further up the perimeter and Clank, Clank Clank, we were at it again. Finally, we broke through about a foot of frozen ground and then the digging was easy. Someone made a crack once about not knocking a foxhole. It was free rent! Free, hell! We worked for that one!

That night, there was another thing that comes to mind. In the foxhole next to ours, was this guy that kept climbing out of his hole, and then jumping back into it. Next morning I asked him what was going on. What he said was that his mind was playing tricks on him. First, he got to thinking that since only his head was visible, he could only be shot in the head, and that could be fatal! So, he would climb out of his foxhole. Then, he'd think, "This gives them a better target. They are more likely to want to shoot at me." So, he would jump back into his foxhole. Then, the head-shot-thought would get him out of his hole again. "Maybe I'll get, lucky and get shot in the arm or leg, but what if they shoot my 'family jewels'?" Back into his foxhole he would go! And, so, it went, all through the night.

On November '27 when we started to convoy toward Hagaru and we had to attack the hill just outside our perimeter, we found some mail and tortillas laying on the ground, going up there. It was no big mystery! We were being supplied by air because the Chinese had gotten into our rear and had blown up the bridge. Some of the drops were overshot and landed in enemy territory. Wasn't it generous of the Allied to supply both sides so we could keep on fighting?

We were living in tents and sending patrols into the hills, looking for North Korean guerillas. This was close to Andong, when I was notified that I was going home with the first draft. We had come north on "Operation Killer." Because I had two Purple Hearts and a Bronze Star, I made the first draft. Sgt. Oberg was also on that draft but he refused to go. I didn't want to go, either, not without the rest of my friends, but Ruben talked me into it when he said, "You don't know what else is in store for us. You might not have another chance to go."

We said goodbye at the road bridge. There was a South Korean standing there, and I called to Ruben's attention the fact that he was wearing Ruben's parka. Someone in his squad had done some horse trading with the Korean. Just can't trust these Marines!

Back from Korea, I tried my hand at different jobs. The re-adjustment was fast. I worked at the Post Office and the Fire Department, then got married in 1955, wound up in California. There, I tried my hand at construction, then applied with the Gas Company and the Police Department. The Gas Company called me first and when I quit them, I took a night job and went back to school. I earned an engineering degree and worked with Fluor and then Hughes. After retiring, we moved to Prescott and now I'm teaching at the University.

My four daughters are all married with children, and yes, Ruben, they all took after Jeannie, not me. They are all very pretty! 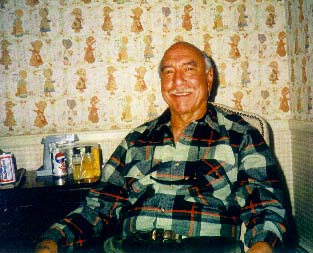