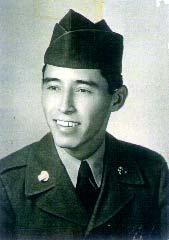 I grew up in the Barrio Libre area. My folks' address was 667 West 40th Street in, Tucson, Arizona. They had moved here from Mogollon, New Mexico (where I was born), by way of Miami, Arizona.

We arrived in Tucson in 1943 after my father was seriously disabled in a mine accident. He worked at jobs in whatever he was able to handle. He was hard on us kids but now I see it was just to prepare us for when he was no longer around.

I feel like I didn't have much of a childhood. Like I mentioned before, my dad was very strict with us. Like most people in the barrio, he had bought an empty lot and started building, one room at a time. He built one room, into which we moved in, and then added another, and then another; as time and money dictated. He would take off for work and would assign me to see that twenty-five adobes were made by the end of the day. I was the oldest of the boys and my brothers were no great help. They would be throwing mud at each other while I was trying to meet my quota. Slowly but surely, the house got built and turned into a comfortable, two-bedroom home.

As the signs of the times, we had an outhouse, but it went by the wayside when home improvements warranted a flush toilet. Of course, my brothers and I had to dig the cesspool since the Tucson Sewer had not caught up with our neighborhood yet. That required digging a four-foot diameter hole until we hit sand and then a couple of feet more. Hand digging the hole required letting one of us down in a bucket with a hand crank which took two of us to operate. At a depth-of sixteen feet we found sand, after what seemed like'an eternity. (After what my father put us through, Marine discipline was a piece of cake.)

When there wasn't anything to do on the house, my dad would farm me out to my uncle who was a gardener. One of my jobs was to mow lawns. There were no power mowers among his tools. It was hard work and in the bright, hot sun! Lucky for me, I had started to learn to play the guitar when I was about thirteen or fourteen years old. My two brothers also learned to play, so we formed our own trio. (I come from a long line of musicians on my mother's side of the family, so guitar playing came easy to me.) Then I really got motivated when I heard El Trio de los Panchos. The trio blew me away! I used to buy their 78-rpm records and play them and replay them until I learned them. When I found out I could earn money playing the guitar, I never went back to manual labor. The only calluses you'd find on my hands would be on my fingertips.

I was in high school when Manuel Chapo Pesqueira talked me into joining the Marine Reserves. I was only sixteen but I lied about my age. The extra money and clothing were appealing. I joined in February of 1950 and attended one summer camp.

When the Korean War broke out, my mother started to worry about me and wanted for me to get out. I talked her out of it, telling her that I probably wouldn't even be sent overseas. At that time, I was assigned to the motor pool reconditioning trucks and other vehicles that had been put in mothballs. Then she started reading about the atrocities being committed by the North Koreans. Somehow, she got the ear of a politician who then contacted the Marines. I was only on my third week of boot camp.

My D.I. (drill instructor) stood in front of me, looked me straight in the eye and said in his gruff voice, "All right! Anyone who is not yet seventeen years old, step out of ranks! You are going, home!" Still. looking at me, he repeated himself three times. So, shaking in my boots, I stepped forward and that ended my hitch in the Marines.

I thought that was a dumb way to handle this. Some of us would have been. seventeen in a few days or so. There was quite a bunch of us. Separating us and forming another group created a lot of paperwork and lost time. Of course, I was sorry not to have shipped out with the rest of the Tucson boys. But then maybe I was just plain lucky!

I have some good memories of my short time in the Marines. I remember getting together with Gasper Eldridge, Freddy Lopez and Tudy Lopez and a bunch of Tucsonans gathering around to hear us play. The sense of humor, the jokes, the kidding, the high morale that was so much apart of our group, is great to recall. Maybe if they had kept us together, we would have won the war by ourselves, or ... gotten everybody killed!

When I was twenty-three years old I was drafted into the Army. I could have gotten out of it. I was married, had one child and another on the way, but I wanted to go. My brother Johnny decided to enlist along with me. My other brother, Freddy, had already left for the Air Force. Up to this time, we were playing and singing professionally. In Freddy's leaving, our trio was already broken up. I did a two-year hitch in the Reserves and Johnny did a straight three-year hitch in the Regulars.

Next, I was sent to Wiesbaden, Germany, as part of a Triple A Battalion. Brother Freddy happened to be stationed close by, so we would see each other often. It wasn't long before someone heard us playing and asked us to play at the N.C.O. (Non-Commissioned Officier's) Club. Soon, we took over the club on Saturday nights. I guess we were a novelty and a refreshing departure from Rock and Roll. We had a lot of fans and even the Germans loved us.

When the military switched from AAA batteries to "Nike" for air defense, I was released early, for the convenience of the government, rather than to be re-trained. Back in the States, I did two years active duty and two years inactive duty in the Reserves to fulfill my military obligation.

Back from the service, I played here and there with other groups. In 1960 and 1969, I played with Los Elegantes, a quartet headed by Seferino Flores. We were very popular so we worked pretty steady. We even hooked, up with a USO tour and went to Vietnam. That was an adventure!

We did three weeks in Singapore and another three in Bangkok after we covered all of Vietnam. The night before we got to Cameron Bay, two USO entertainers had been killed by enemy shelling! Risky business! Although we didn't get paid much (everyone got $150.00 for two performances a day), it was very rewarding to see how much the servicemen appreciated us being there. I think the Vietnam servicemen got a raw deal from the home front. One thing was to condemn the war (which was politically motivated), but another was to condemn the men that had to fight it. They were there to fulfill their obligation.. I think they should have been shown more respect.

When my brothers were done with their military commitment, we re-formed our trio and continued where we had left off. We spent a lot of time in California and did very well, but were glad to return to Tucson. We continue to do well at our trade. The best part is, we enjoy playing. I get a high whenever people show their appreciation with their applause.

In 1988, I came close to dying. I was misdiagnosed with prostate problems, but it turned out to be bladder cancer. I underwent some serious surgery. My bladder was removed, along with whatever joined it, but I was lucky to have a good doctor who reconstructed a new bladder and brought me real close to normal.

Working the mines finally caught up, with my dad. In 1970, he died of silicosis. Five years later, my mother married my father's friend, who had also widowed. She abandoned the house and moved in with her new husband. It used to pain me to see that house go to ruin, so finally, I decided to take it over and have continued to fix it up and make it into a comfortable home. You just can't beat living in Tucson!

The house is full of memories that I treasure. I especially remember how hard my mother worked. Shortly after we arrived in Tucson, she got a job at the University Student Union Cafeteria and worked there for years. She still managed to cook our meals and run our home and discipline her children. Who needs a boot-camp D.I.?