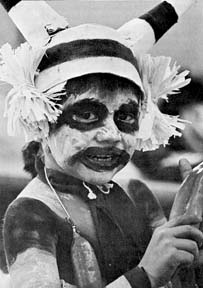 It was during the Bean Dance season, which occurs around February or the month called Powamuya. This is the time when many ceremonies occur, all culminating in what is referred to as the Bean Dance. One of the ceremonies is the appearance of the so-called ogres. That's really a misnomer. This little story tries to bring out the Hopi conception of these Kachinas who come threatening to a child. An ogre in the English sense has no moral fiber in him. He's interested in consuming you regardless, but the Hopi Kachina known as So´yoko is a very moral spirit being and he threatens only those children that are bad, incorrigible and misbehaving. He threatens you with the alternative that you straighten out or he is going to eat you. So that's really not an ogre.

These Kachinas referred to as ogres appear to Hopi children, actually to every child. But they are a little bit more vehemently threatening toward children who are considered as being pretty bad during the past year, and this particular extra threat is all prearranged so that their threats would put the "fear of God, " so to speak, in the child's mind and that hopefully he would straighten out. But actually it's done in kind of a unique way, and this little story I'm about to tell shows it.

It seems that back in the older days of old Oraibi, before the division of Oraibi, there was a young man (and I think we'll keep him anonymous) who was considered a bad child by his parents. He was a pretty bad boy, so the ogres knew that when they came to him. They stood outside the door of his house, threatening him. There was the big uncle ogre. (He has to be the uncle figure because in Hopi the disciplinarians are your maternal uncles, not the father). So there's this big uncle ogre with the mother ogre and the brother ogres and the whole throng of helpers ready with the ropes, burden baskets and so forth to carry off bad children. All this threatening outside is to build up the drama and anxiety in the child, really to get him to start thinking "My Gosh! Now I've had it! How am I ever going to get out of this thing?"

Well, he had been coached prior to this time but didn't remember it when he got scared. He'd been coached to do a little dance and it happened that it was to be a Clown dance. He consulted probably with his father or his grandfather who finally came up with the idea "Well, look. You know how to do this dance. Let's go out and show them we can do this and maybe if we can make them laugh or we can make them go along with the story we will have the advantage because if they laugh or if they go along in any way with the story, they've lost. They'll no longer have a right to take you away and eat you up." So the boy finally realized that this was the only chance he had for his own survival.

Quickly they dressed him up as a clown. And it so happened that Grandma had been cooking off to the side a sheep's head which is a kind of delicacy. The head with the skin on is buried in the hot coals overnight, and when it comes out it is really nicely roasted. Children love this stuff. So there was this young boy who was probably looking forward to having it himself, but now it is more important that he save his own skin first. He agreed to use this roasted head because it was necessary to this whole little skit that there be something which was important to himself and to the ogres that would make it look real.

So the child was led out under the protection of his father and his grandfather and they approached the ogres outside. The ogres were all making threats to grab the boy, so the grandfather said, "Hold it now. It's the custom that this boy be given a chance to make amends, to make an apology, to show you that there's something good in him." So the boy was given the signal and he - dressed up like a clown - went up in front of the whole line of ogres, and he sang this little song as he danced:

Then as he threw the head on the ground in front of the ogres he took the pose as though to get ready to grab for it. Suddenly he feigned a grab f or the head! Sure enough there were several ogres who moved to pounce on it. They were so taken by the child that they played along with his little story. So that's how he saved the day for himself.

The song is nothing more than "Let's eat; let's eat, because this thing here goes good with pumpkins; it goes good with . . . " you know, really putting up a dish of things which goes good together for a fine meal. And, "So I throw this meat down and now I G-R-A-B for it!" and all the others grab for it. And that was how he won his case before the ogres. The literal translation of the song is: