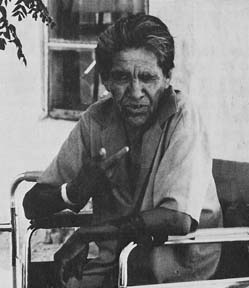 as told by Ted Rios
recorded by Kathleen Sands

Ted Rios is a 64-year-old Papago from San Xavier. Born and raised on the reservation, he traveled widely in the West during World War II doing defense work. At the end of the war he returned to San Xavier where he still lives. Ted, who is tri-lingual, told this story in English to Professor Kathleen Sands of Arizona State University in the summer of 1974. It is, he says, one he likes to tell to his friends. Readers should note that this story is far less formal in its content, intent, and performance than the preceding one from Frank Lopez. Whereas Frank Lopez tells what amounts to a portion of the Papago "Bible," Ted Rios' story is far more secular and conversational.

My uncle - my uncle on my mother's side -
and this man,
they grow up together, and they're like this all
the time. Some relation -
I don't know what kind of relation,
but it's a close relation,
So, you know,
he comes.
When he got
when my uncle got in a wreck that night and
got killed there,
he knew it already.
Nobody,
nobody said anything or nothing.
He just -
I don't know how, but -
just like I say, he knew.
I know when it happened, then, see,
I know he came.

Oh, it's in the '30s sometime.
It's quite a long time ago.
He lived down there in -
by Santa Rosa in this other village.
I think they call it Ack Chin.

There's another village beyond,
before you get to Santa Rosa.
There's another village where he lived.
I don't know what happened,
but then all of a sudden somebody told me he's gone already.
Yeah, he died.
He's the one that -
he was the one that's been curing everybody
around here.
He's a good one,
and then he know everything.
And about that egg-
I guess it's before he ever came to be big -
known all over - but was like anybody else.

He fools around like all these guys.
And it's when he was in Phoenix.
That's when they try to arrest him -
Policeman tried to arrest him for being drunk
or something.
They didn't know he was a smart man.
They were yelling at him and saying, "What
are you, a drunk, chief?" and all that.
But he told the policeman that he wasn't
drunk,
but they want to put him in jail, I guess.
They were right in the office.
Everybody came in there and came in,
you know,
like they wanted to know what happened.
He was asking the time,
and this policeman pulled out his watch,
a good watch,
a gold watch, and he said, "It's the time right here."
And the medicine man said, "Well, let me see that,"
and it's a good time-piece-
A good watch.

The medicine man said,
"No,
I don't think so," and knocked it down on the
desk there,
bang it,
whatever.
Whoosh -
everything fall apart.
"Ah, you spoiled my watch! You shouldn't do that!"
You know,
that policeman got mad.
"Oh. its still going"
You know, the hands - I guess the hands fell off.
"It'll be going," he told the policeman.
Like this,
took it back -
"See, it's going now. It stopped, but it's going."
And you know,
the policeman still has that watch.
Put it right back. He was afraid the medicine man might do it
again.

And then everybody started coming in, you know.
They were amused by him, you know.
They really want to find out something before
they take him and lock him up.
Then finally,
I think he took that egg out,
and he said, "Well, I'll show you something, too."
Set that egg down,
slapped it on the counter, but it didn't break.
They said, "What's that?"
"It's an egg.
Look at it."
That egg started moving, you know,
walking around, running just like it's kind of
steep, you know.
Just when it would come to the edge where it
would fall over,
it never did.
It just went right around.
And, everybody was so excited about it.
"Oh, that egg's gonna fall!" "Yeah, it's gonna
bust!" "Better watch it!"

Well,
everybody was watching while it's dancing
around on the table or whatever,
counter -
that's when it's going to go off to the ground -
to grab it, you know.
While they're doing that,
he walked out the door,
walked down the street,
got away.
He's gone.
So he got out of it.
Somebody told me about it, you know.
I heard it so many times, you know.
He's the one that cured my dad when he got
witched down in Pima country.
I found out he was curing somebody down in
the village,
right over there.
He was there and I told him about it.
So we went over,
came over there,
and he's the one that got that thing out,
that thorn or whatever,
got it out.
Good man -
he's very honest. 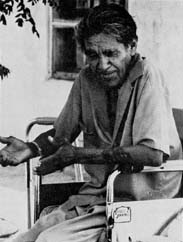