The Sabino Canyon Ruin Survey: What We Found

The article appears with the permission of The Old Pueblo Archaeology Center, (520) 798-1201

The Sabino Canyon Ruin Survey: What We Found
by Allen Dart

The numbers and kinds of archaeological features identified during the recent Sabino Canyon Ruin-area survey, described in Robin Rutherfoord's, "An Archaeological Survey of the Sabino Canyon Ruin Area" is quite impressive. Old Pueblo Archaeology Center's survey relocated all five Hohokam adobe-and-rock-walled housing compounds and outlying rocklined house foundations, the ancient Sabino Creek irrigation canal, and most of the other outdoor prehistoric rock alignments that were shown on the first comprehensive map of the ruin made in 1920-1921 by A. E. Douglass and H. B. Leonard. However, it also revealed that the ruin is about twice as large as that early map suggests.

We now know there are several dense artifact concentrations that probably represent locations where the Hohokam had lived in pithouses, outside the ruin's visible surface housing compounds. These heavy artifact scatters and other architectural features we located suggest the Sabino Canyon settlement was founded by pithouse-building Hohokam Indians between A.D. 1000 and 1100 near where Sabino and Bear creeks converge. It was not till after 1100, however, that site occupants began building the settlement's above-ground, pueblo-like housing compounds, in an area more than 200 meters north of the originally settled area. 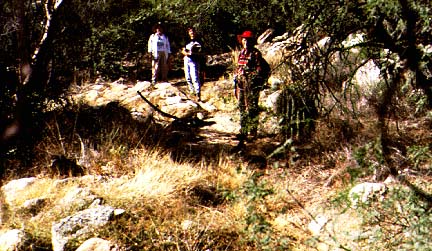 Another major find is an ancient canal on the Bear Creek side of the ruin. Segments of this canal ( are traceablefor approximately 500 meters, much farther than the visible remnants of the canal we already knew about on the Sabino Creek side.

Artifact Scatter Hohokam pottery and flaked stone pieces cover most of the site area though there are some spaces without significant prehistoric artifact accumulations. Artifacts dating between 1930 and 1960 are concentrated around the sit's historical structures. 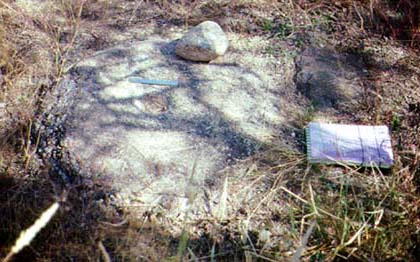 Bedrock Grinding Stones Two mortar holes [35K] 10-15 cm in diameter and 2-3 cm deep that were formed by pounding stone pestles into rock surfaces were identified on large boulders in the Sabino Creek and Bear Creek floodplains outside the ruin's main Hohokam habitation area.

Canals The survey identified remnants of at least two irrigation canals that diverted water from Sabino Creek and Bear Creek onto those streams' floodplains. The visible canal segments are linear, silt-filled depressions at the bases of stream terrace slopes, with piled boulders and cobbles banked up on the downhill sides of the depressions. The canal at the edge of the Sabino Creek floodplain is shown on a 1918 government land survey map, so it may have been constructed historically, but the Bear Creek canal is not on historical land survey maps, so either of these canals could have been constructed originally by the Hohokam.

Compound Walls Walls of five separate Classic period compounds are traceable on the site surface. Designated Compounds A through D and Enclosure A by previous researchers, the five compounds range from about 25 m to 73 m long apiece, and occupy areas of 0.15 acre to 0.5 acre apiece.

Constructed Linear Feature Boulders and cobbles that appear to have been purposefully piled into meandering lines in at least three places along the edges of the Sabino Creek and Bear Creek stream terraces west and east of the main ruins area may be remnants of low masonry walls or possibly irrigation features.

Cremation Fragments of isolated cremated bone were found on the surface near the south end of the site. Other pieces have been recovered in excavations See Don Everitt's article, "Excavations at the Sabino Canyon Ruin, 1937-1950". 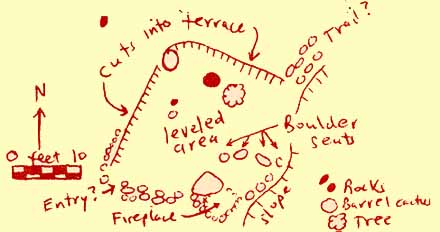 Dugout Illustrated above is a partly dug-out, rectangular, flat-bottomed structure with drylaid masonry walls and a well built but unmortared stone fireplace that was found along the west margin of the ruin at the edge of the Bear Creek stream terrace. A rock embankment (constructed linear feature) extends south from the dugout to an old roadway leading down to the Bear Creek floodplain.

Hearths Besides the fireplace associated with the dugout feature just described, hearths have been found in the ruin's excavated Hohokam pithouses and are probably present in the site's aboveground Hohokam structures as well.

Middens At least ten heavy concentrations of surface artifacts are probably Hohokam middens (deep trash accumulations). Two other middens have been excavated by Old Pueblo Archaeology Center in the areas in and near Compounds C and D.

Mound, Trash One discrete trash mound 13.5 m in diameter and 50-6- cm high was found in the vicinity of the ruin's two northernmost compounds.

One Room Structure About 20 of the "House Foundations" features noted above probably represent one-room above- ground structures. Also, three ruined historical structures in the east half of the ruin are evidenced by concentrations and low piles of milled lumber, wire nails, and cement plaster that had been applied to a wire-mesh lath. Don Everitt suggested that these structures and the dugout described above may have been constructed as part of a Hollywood cowboys and Indians movie set that was built for a film shot at the Sabino Canyon Ruin in the late 1930s or early 1940s.

Pithouses The density of artifacts on the site's surface and the number of large pot-hunting craters suggest there were more tan 100 pithouses at the Sabino Canyon Ruin in addition to its above-ground compounds and outlying structures. Several Hohokam pithouses have been excavated by Old Pueblo Archaeology Center and previous investigators.

Plaza Four of the site's five above-ground Hohokam compounds have large open interior spaces where there are few or no wall outlines. These spaces may have been plazas used for various purposes including daily subsistence activities, recreation, and/or rituals.

Public Buildings Architectural differences between the "Enclosure A" compound and the site's other compounds suggest Enclosure A served some public function. Unlike the others, Enclosure A has rows of rooms lining two of its sides and unusually massive enclosing walls on the other two, and appears to be mostly open space in its center suggesting it contained a plaza intended for public activities.

Resource Procurement Area The floodplains adjacent to the Sabino Canyon Ruin's main Hohokam habitation area probably were used for collecting and processing mesquite bean pods, hackberries, and other wild plants, for collecting river cobbles and boulders for construction, and possibly even for fishing from the streams. The relatively flat, elevated area between the two creek floodplains, where virtually all the Hohokam habitation features are located, would have been a natural source of mesquite, saguaro cactus, and other wild resources, too.

Road/Trail Segments of at least three historical roads were found. The four most obvious roadway segments are roadcuts gouged into the Bear and Sabino Creek terraces, connecting the floodplains to the terrace top. The roadcuts on the Bear side are all within 115 m of the historical dugout structure. Also, each stream's floodplain exhibits a long and straight, apparently humanmade terrace that may have been built to keep road segments associated with the roadcuts from eroding out during floods.

Roasting Pit Several concentrations of fire-cracked rock on the site surface probably represent the locations of Hohokam roasting pits, in the which stones were tossed into firepits to retain heat long enough for overnight roasting of plant or animal foods.

Rock Alignment, Undefined Several straight boulder and cobble alignments visible on the ruin's surface that do not connect to other alignments could be remnants of soil- or water-control devices or above-ground structure walls.

Rock Ring An oval rock ring shown on the 1920-1921 Sabino Canyon Ruin map was evidently a rock-lined, circular structure. Other, smaller rock rings in various places at the ruin are similar to campfire rings used by Anglo- Americans today, and some of these may date to the historic period.

Roomblocks Old Pueblo Archaeology Center's excavations have confirmed there is a row of conjoined rooms along one side of the Enclosure A compound, and one other side of it may also be lined with a block of rooms. Other compounds and a few of the smaller outlying structures also have conjoined rooms and so are considered roomblocks.

Scatter, Trash Hohokam and historical artifacts are sparsely scattered over most portions of the Sabino Canyon Ruin outside the visible structural remains and denser artifact concentrations.

Wall Structure walls are indicated on the surface by many lines of upright stones, some of them intersecting one another at approximately right angles and some located within low, straight ridges of earth that probably represent eroded-down adobe walls.

Water Control Device Water control devices probably made by the Hohokam include the rock-embanked canals along the edges of the Sabino and Bear Creek floodplains and checkdams made of lined-up stones across several very shallow runs on the higher ground between the two creeks.