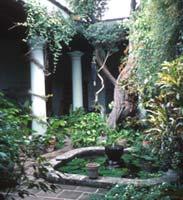 The adobe brick, in my thinking, is the key element in understanding the early architecture of the arid regions of the U.S. and Mexico. The material required for its making - sand, clay, and water - were readily available, often at the site of the construction. The thermal mass characteristics of adobe made the material extremely well suited for the relative extreme temperature range between day and night of an arid environment. During the hot summers, the earthen walls absorb the coolness of the ambient air at night and release it into the building during the day. In the winter, the heat captured from solar radiation during the day is released into the building at night. Admittedly, this explanation is overly simplified, but the basic principal is correct. The early builders using earthern walls, floors and roofs probably didn't understand why the material reacted in such a thermal beneficial manner, just that it did, and that was suitable for their needs. Therefore, both the settlers who required basic shelter for themselves and their livestock, as well as missionaries who built churches, used adobe primarily in their construction efforts. 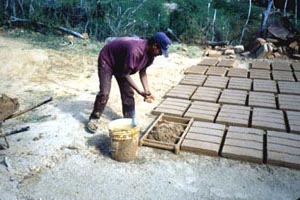 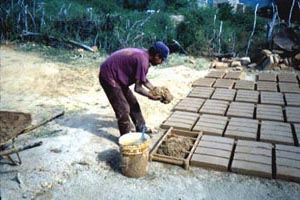 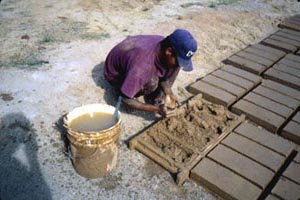 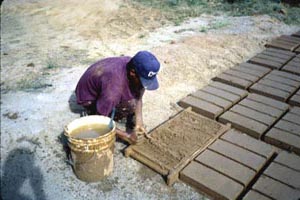 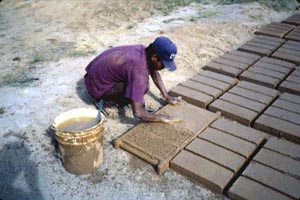 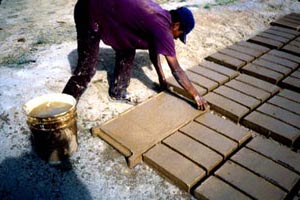 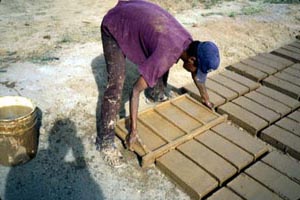 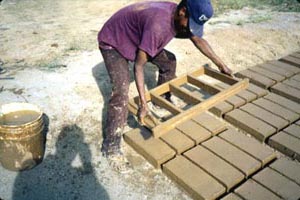 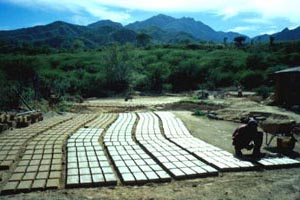 This is a sequence of images of an adobero (adobe maker) near Alamos, Mexico, demonstrating how the bricks are produced.

Adobe can be a material of community. By that I mean that it is a low-tech product. It is relatively easy to make, and buildings made of earth are not difficult to repair. The skill required to work with adobe, at least for basic maintenance, can be developed with just a few days of instruction. That is why communities in the Southwest and Mexico often form workshops and group efforts to repair adobe structures. Actually it was common in many communities for women to come together and re-plaster each other's houses once a year.

Another issue concerning adobe adobe and its relationship to the architecture of Aridoamerica, as some Mexican architects refer to the U.S. Southwest and extreme northwest Mexico, is the architectural term, mass. From a practical perspective, adobe is a heavy and dense material. Buildings built of adobe are grounded to the earth; they are part of their site. It is interesting to note that a pure adobe structure left unattended for many years will dissolve back into the ground. It will literally melt like a candle, and eventually become a rectilinear crater of clay. This is why a lime plaster coating is necessary to protect the adobe from rain and wind caused erosion.

Visually speaking, this quality of mass and weight, as opposed to lightness, is inherently characteristic to adobe construction. When this characteristic is disrespected, such as when window openings are excessively wide, the quality of mass is defied, causing a perceptual fracture to occur. In other words, it doesn't look right. Because of relatively small windows most of the older adobe buildings appeared dark inside. And it's true, adobe buildings are dark, but remember that most of them have been built in regions of the world where the sun is extremely powerful and shelter from the intense light is desired. However, some architects of early adobe buildings employed design strategies in order to selectively position daylight at specific locations in the interior space. The clearstory window of many east and south facing New Mexico churches allowed for illumination on the sanctuary or altar area.

Kubler, George. The Religious Architecture Of New Mexico In The Colonial Period And Since the American Occupation; foreword by Barbara Anderson. Albuquerque: University of New Mexico Press, 1990. SABIO RECORD