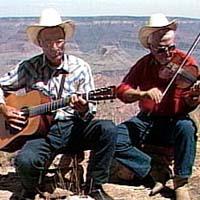 Some Thoughts About Cowboy Songs

Strictly speaking, cowboy songs and poetry are part of the occupational lore of the cattle industry, just as cowboys are the laboring force of that industry. The difference between a song and a poem is simple: one is sung, the other recited. In other words, a song can easily be given as a recitation, and a poem can be put to music (as Gail Gardner's "Sierry Petes" was when Billy Simon got hold of it.)

Another body of song might be better called "western songs." Western songs, using this distinction, are created for the entertainment industry, and are closely associated with the "singing cowboy" films of the 1930s-50s. They can indeed talk about aspects of cowboy work, but usually from outside, rather than inside the culture. They are usually easily accessible to outsiders (as the lines

However, there is a lot of overlap between the genres in many ways. Entertainers will sometimes sing cowboy songs, and a lot of cowboys really like songs like "Tumbling Tumbleweeds." Still, the distinction can be pretty useful, especially when dealing with older, historic material (and some of our popular cowboy songs have in fact been around since the later 19th century.) Things are even more confused when you realize that one way ranches have survived through the 20th century has been to turn themselves into cultural interpretation and entertainment institutions (dude ranches) while at the same time continuing to be working ranches. For a 1920s comment on this, see Gail Gardner's poem (also sung) "The Dude Wrangler." In addition, cowboys songs have been recorded by non-cowboys and working cowboys (and people with some ranch experience) since the mid-1920s. Nothing spreads a song better than a phonograph record or a radio show.

In addition to the cowboy/western song dichotomy (which can also include backup guitar style, as western song folks will often use "sock" chords up the neck of the guitar, while cowboys, if they play at all, may limit themselves to the basic end-of-neck positions) there's a whole other kind of music -- Western Swing that should probably be taken into account. Dean Armstrong and the Arizona Dance Hands are such a band, who played a lot at Tucson Meet Yourself, always opening the Friday night show so as to get to their regular gig at Li'1 Abner's steakhouse.

My "regional art forms" chapter in Southern Arizona Folk Arts touches a lot of these issues.