In the second year of his administration, UA President Dr. Rufus B. von KleinSmid was told that Mrs. Lavinia Steward was interested in donating $60,000 to the university as a memorial to her late husband, Henry B. Steward.

It was known that Mrs. Steward was interested in astronomy.

Von KleinSmid and Clara Fish Roberts convinced Mrs. Steward that she could not endow a memorial more suitable than an observatory. The university matched the endowment and later purchased a thirty-six inch reflecting telescope.

The architectural firm of Lyman and Place, its reputation now firmly established, was hired to design the observatory. The dome itself was designed by Godfrey Sykes.

Placed in charge of research for the building of the facility was Dr. Andrew Ellicott Douglass, who had served as interim president of the UA from Dec. 20, 1910, to March 10, 1911.

Douglass came to the university in 1906 to teach physics and geography. He became a world-famous scientist, founded the UA Department of Astronomy, and later engaged himself in tree ring research. He was to serve as Director of the Steward Observatory from 1918 to 1938.

Dr. Douglass visited a number of highly-ranked observatories and then conferred with Lyman and Place on the design for Steward.

World War I held up construction of the observatory and it was not dedicated until April, 1923. Historian Douglas D. Martin gives much credit for the securing of the observatory to von KleinSmid. It was built on the highest point of the flat mesa that serves as the UA campus, "highest point" meaning a few feet higher. The outside is of white terra-cotta tile to keep the instruments cool.

The College of Architecture's description of the building: "It is a small octagonal structure of white, glazed terra cotta. It is dominated by a ribbed hemispherical dome. The building is classical with implied pilasters and implied entablature and details at the entrance archway." 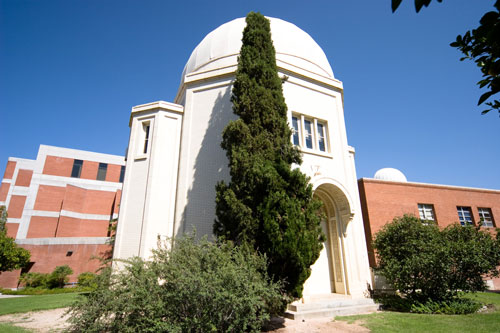 Roy Place told his son, Lew, that the telescope sat on a concrete pedestal. An excavation was made for the pedestal with concrete walls and flooring. It was filled with fine sand and then concrete was poured over the sand. The observatory's director, Douglass, had been worried that the vibrations from trains to the south of the university might interfere with the functioning of the telescope. Later, Douglass told Roy Place that the pedestal emplacement was perfect.

Steward Observatory with its additions is located east and slightly south of the Education Building. It is south of Second Street and west of Cherry. When Steward Observatory was dedicated in April, 1923, inauguration ceremonies were combined with the dedication to honor Dr. Cloyd Heck Marvin, the new UA president, who had been hired in the fall ofl922. The Arizona Daily Star reported that Dr. Ernest Carroll Moore, director of the University of California at Los Angeles, from whence Marvin came, delivered the principal address. Honorary degrees of Doctor of Science were given Dr. V.M. Slipher director of the Lowell Observatory, and Dr. G. Aitken, director of Lick Observatory.

Festivities closed with a formal reception at the Masonic Temple. The Star called the event "one of the most brilliant occasions Tucson had seen." Lavinia Steward's donation to the university has been a beautiful visual addition for the campus and is admired by anyone seeing it.

Another of her donations was not admired at all, but then you can't win them all. During the presidency of Homer LeRoy Shantz, 1928-36, Mrs. Steward donated a large aviary to the UA and it was placed inside the main west gate. Complaints were immediately heard from citizens and students who claimed the aviary stank.

Historian Martin reported that the cage was the subject of an editorial in the university's newspaper, Arizona Wildcat, which hued and cried that many of the birds were not indigenous to the Southwest.

The cage - architect unknown - was then moved to a site where the Student Union now stands and later to a location at Highland and Fourth Street. Citizens complained that the birds were early risers and awoke the citizenry with their calls. Shantz, a great compromiser, removed the serious offenders - an eagle, some cockatoos and a macaw.

"After that," wrote Martin, "the cage seems to have vanished."