(Officially known as the University Library for Science, Engineering and Oriental Studies) 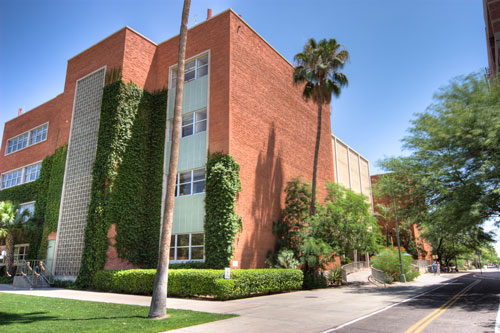 At first, the building was called the Science Library. Then in 1972, it became the Science-Humanities Library. In 1977 it became the University Library for Science, Engineering and Oriental Studies. Recently, a marble facade was removed by the university. It was claimed that the facade had become loosened and was a potential danger to those who passed on the outside of the structure.

Lew Place tells an anecdote about the construction of the original building: "I once worked with brick suppliers and some contractors. We tried to make sure that the bricks were laid in the exterior walls in a variegated pattern so that there wouldn't be a line of dark brick and a line of lighter brick. Streaks. And that was one of the things I had our inspectors do. To make sure that they watched the brick work that was being laid up, that the streaks didn't occur because if they did we would make the contractor take it down and start over.

"One time on this Science Library, right next to Bear Down gym, facing the parking lot (on the west) the wall had been laid up to the second floor. President Harvill was standing over there by the old Administration Building looking down at the wall. He called me on the telephone and said, 'You get up here; I've got a complaint.'

"So I went right up and he took me by the arm outside and said; 'Take a look at that wall!'

"It had some streaks and we had to make them take the wall down and start over. And today, the wall is completely covered with ivy and you can't see the brick. The great architect Frank Lloyd Wright once said: 'A doctor can bury his mistakes, but an architect can only advise his client to plant vines.'"

Lew Place spoke of the taking down of the marble facade. "The building had a porch and on the inside of the porch we put marble and, up the whole front of the building. It looked good. But the Physical Resources plant took it down. They were afraid it was going to falloff. But that marble was well anchored. Nobody ever got in contact with me about it. Not a soul."

Warren Moon said, "All of that marble facia was anchored clear' back into the wall. Apparently they've got some department at the university that goes around just looking for trouble. Like the auditorium!"