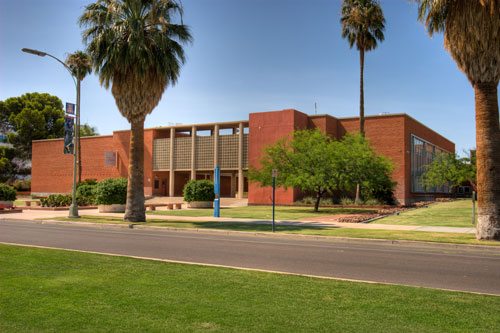 This structure is located on the east end of the mall on the north side of the mall. It is the first building west of Campbell Avenue. It was designed by Place and Place and the contractor wasM. M. Sundt. The building was completed in December, 1964, at a cost of $1,305,177.

It is of modern design.

When it was completed, the structure was named Physical Education for Women. On April 10, 1985, it was officially renamed the Ina E. Gittings Building.

Ina E. Gittings was for 31 years Director of the UA's Department of Physical and Health Education for Women. She died in 1964, after retiring from the department she headed from 1920 to 1951. The department is now called the "Department of Exercise and Sports Sciences." and the building is used for both men's and women's physical education classes.

Lew Place says that the site of the Gittings Building is on land he once owned at the intersection of North Warren Avenue and Third Street. "That's where I built three houses to sell," Place said. "The university at that time hadn't expanded beyond Cherry. I had lived in two of the houses, but finally we sold all three. They were purchased by individuals, not by the UA. "

Place said, "The only thing I remember about the women's physical education building is that we ran into trouble there. A ceramic tile salesman brought a sample of tile brick into the office. We used it in the gymnasium of the P.E. building up to six feet high, instead of common brick, so that if the girls hit it playing basketball, they wouldn't scratch themselves. Houston was head of maintenance at the UA. The glazed brick had perforations in it. It was called Spectroglaze."

Place said that after the brick was installed, "I went out there and ran my hand over it and I couldn't feel a single perforation in it. The maintenance people were going to make the contractor tear it down and put something else up because they didn't like it. Jack Trimble, who was Houston's assistant, got mad at me because I said I couldn't find anything wrong with it, and he simply walked off the job and went over to see Houston. That made me mad, that he would walk off the job while I was talking to him. I drove right over to Houston's office (that was in the days when one could drive from place to place on campus and find a parking spot). I told Houston that I wouldn't put up with that kind of stuff. That when one of his men was talking to me about something, he was going to stay there until we got through. Trimble never forgave me for that one."

Warren Moon said, "The thing I remember about that building was that we had a boiler down in the basement beneath the outdoor pool. It had an areaway outside so you could let the air down to the boiler and so that you could service the boiler. "When we finished the building, we suddenly discovered that the areaway was three feet too short and you couldn't pull the boiler tubes out. We had to build an alcove so you could pull the tubes out."