The new Administration Building was completed in 1966. Place and Place were the architects and M. M. Sundt was the builder. Its original cost was $1,305,025. In 1982, modifications were made to one room at a cost of $29,409, and in 1984, the Regents' room was converted into administrative offices. Its design is called "contemporary."

The Tucson Citizen had this to say about the structure:

"The new administration building -little more than a hole in the ground today - is strictly an office building.

"Unusual for office spaces, however, is the open floor plans for the second and third floors. There are enormous areas undivided except for small executive offices on certain walls.

"The walls themselves are novel. They are re-inforced brick that carry earthquake and wind stresses rather than the structural steel members.

"A four-story tower atop three floors of offices will house administrative offices and a Regents' room paneled in walnut and featuring a continuous, luminous ceiling." 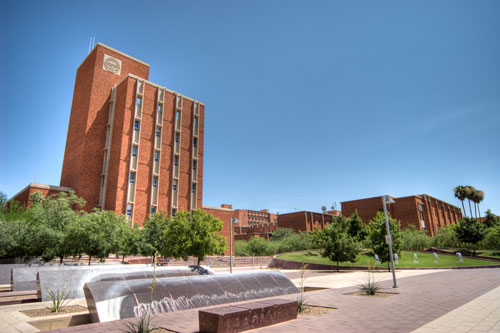 "During the design stage, Fred Miles (of Place's office) was the project architect. There is now a plaque, a medallion, up on the high tower of the building. Someone wanted to put a clock up there instead of the medallion. Dr. Harvill stopped that. He didn't want to make the Administration Building the center point of the campus; he wanted to put the clock on Old Main. And so there was a long discussion and it ended up being the university insignia (the medallion) instead of the clock. The clock is on the Student Union Building."

"I had taken some preliminary drawings to them - about the third time. They contained the exact changes that they wanted. We were all in President Harvill's reception office. There were the comptroller and Houston and two other men and Harvill. I would put the drawings on an easel in the room and with a pointer, point out what had been changed to see if that was what they wanted. Swede Johnson, the vice president, came in late one time and he went over and slumped down in an easy chair. He didn't sit at the table with everybody else. He watched for a few minutes and then he said, 'Place, you didn't put my shower in there.' I said, 'No, I didn't.' He said, 'Well, put it in. I need it when I have to go out at night because sometimes I don't go home. When I have to go out on university business.' Dr. Harvill then spoke up and said, 'It's okay. Go ahead and put it in.' Then he turned to Swede and said, 'Can I use it once in a while when I'm staying late too?' With that, Swede got up and left the room."

"One thing about the Administration Building was that curtain wall off to the right. The porch comes out in front of the building and the porch is covered and the steps go down and out. I wanted to do something, just to break it up. I didn't want an ordinary iron rail there which would not have been very attractive. I got a fellow by the name of Charlie Clements and told him what I wanted. I had put the wall with just some little holes in it. Slap-dash stuff. He came in with four models for me to look at. All the same size, but with different colors. They were clay models. So I got him to make it. He is a local sculptor. I think he did a fine job."

"The only thing I remember about the Administration Building was that right next door was Gordon Luepke's Education Building (Luepke was a Tucson architect). The Sundt superintendent laid out all the column footings two feet off the right dimensions and there was a scurry out there one day you couldn't believe. Tearing those out and putting them back in and Gordon waving his hands and the university people sobbing and wringing their hands."

"When the Administration Building was all but completed, we had another job at the university. Dickie Houston insisted that we have a certain kind of composition roof. I always want to put gravel on top of the composition because anybody who gets up there in the summertime would make holes all over the place. Houston would never let me put the gravel on.

"Then when we were doing this other building, he had found in the specifications where we had gravel. Houston said, 'I told you that I didn't want that.' So I said, 'It holds up a lot better. You don't get any leaks and you have leaks in the other roofs.' He said. 'We don't have any gravel roofs up here.' I said, 'Have you ever looked at the Administration Building?' And he walked out of that door and went up and looked at the roof and came down stairs. I said, 'Did you ever have a leak in this building's roof?' "He said, 'No. Forget it.'"