The Story Behind Her Symbols 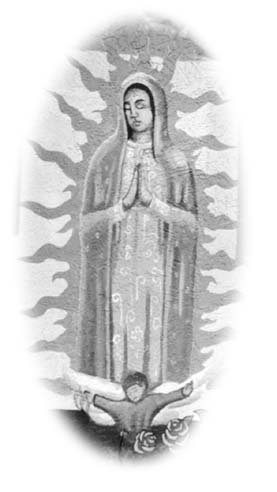 Always compassionate. The Indians felt that the face was the window of the inner person. She is almost always dark-skinned and dark-haired like Indians.

Her hands are not poised in the traditional Western style of prayer but in the Indian manner of offering. (Note: we could not find any examples of such hands on the Westside)

The sun rays recalled for the Indians that the sun played a key role in their civilization. But the image of the Virgin is meant to be greater than the sun-she hides the sun; only the rays come forth. She hides the sun, but does not extinguish it.

The angel at the bottom of the image was seen by the Indians as an "intermediary god" carrying in a new era.

Her eyes are always humble, looking down, suggesting that, great as she is, she is not a god. Indian gods never looked down-they looked straight ahead.

The usual color is turquoise-a color that was once reserved for the great god Omecihuatl. Although the Indians had many "intermediary gods," Omecihuatl was considered the supreme god.

The maternity band around her waist was the Indian symbol for a pregnant women, a mother who will give birth.

The stars on the mantle are a sign that a new civilization, or era, is beginning. The Indian tradition recognized the end and the beginning of different eras throughout the ages, and the destruction of a particular civilization or era was always accompanied by a comet, or a body of stars.

Standing on the moon indicates that she is greater than the god of night, the Moon God.