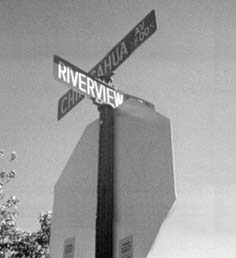 How does a barrio or a neighborhood get its name? As far as we can tell, if you can't trace it back to its developer, it's like folklore: there's no definitive story, just a lot of versions on similar themes. Here's some stories we've collected on the neighborhoods and how they got their names.

"It got its name because of the way that street Riverview curves around like that, like the shape of an armpit."
(Anonymous, 6/23/97)

"It was from the kids of other neighborhoods, the way they would tease each other. You're from Sovaco, you smell like an armpit."
(John Pazos, 7/8/97)

We could only find one story on Jollyville's name. This story says that Jollyville got its name because kids from other neighborhoods like Sovaco would tease Jollyville kids and the Jollyville kids would never get mad, they would just say: we live in a nicer neighborhood. So the other kids said these kids were "jolly" because you couldn't make them mad. And "jolly" led to "Jollyville."
(Source: John Pazos, 7/8/97)

Apparently Barrio Anita sits on an area where the Spanish once placed tonto ("tame") Apaches. These Apaches sold this land to the Spanish in 1828. Anita used to also be known as barrio de los hilachos or ragged ones.
(Sources: James Officer, Hispanic Arizona, University of Arizona Press: 1989; Angel Ignacio Gomez and John Henry Chilcott, Outline Of Mexican American Education, The Department Of Learning And Staff Development, Tucson Public Schools: 1976)

"Anita Street was the main street in the barrio, with all the cross streets leading into it. According to Tucson resident Julia Soto, a woman whose first name was Anita, used to live in the barrio and hold lively, outdoor patio dances at her home. The street, and later the barrio, were named after her."
(Tucson Citizen, 7/27/79)

"There used to be a healer woman over there...my mother told me. They named the barrio after her...her name was Anita."
(Gilbert Jimenez, 7/7/97)

Barrio Hollywood is now considered to be bordered on the north by Speedway, on the south by St. Mary's, on the west by Silverbell, and on the east by the Santa Cruz River. But in the past, Grande Avenue, bisecting today's Hollywood, was considered a dividing line. On the east of Grande, the neighborhood was originally known as Riverside Park, a little subdivision that Mexican families began to move to from older Tucson barrios around 1920. The area west of Grande began developing in the thirties with the subdivision name El Rio Park. Also, Lydia Carranza Waer (b. 1929), who grew up in Riverside Park, used to hear people in the thirties refer to the area west of Grande as Beverly Hills.
(Source: Thomas E. Sheridan, Los Tucsonenses: The Mexican Community in Tucson, 1854-1941, The University of Arizona Press: 1986; Lydia Carranza Waer interview, 6/25/97)

"They thought they were stars over there in Hollywood-that's how it got its name."
(John Pazos, 7/8/97)

"Jim Corbett told me that Hollywood was the name of a baseball team that played for the neighborhood in the wider community. Or maybe it's because the women were so gorgeous."
(Margaret Mckenna, 6/26/97)

"The name Hollywood originated in the Depression-it was sort of a sarcastic joke."
(Lydia Carranza Waer, 6/30/97)

"When El Rio Elementary was renamed Manzo after former principal Ricardo Manzo, Tucson bureaucrats began to refer to the area as Manzo. But we resisted the name. Hollywood already had a name."
(Salomón Baldenegro, 6/19/97)

In 1915, a man named Schwalen was the owner of much of the property that now comprises Menlo Park-a subdivision name which reflected Schwalen's fondness for the town of Menlo Park in the San Francisco Bay Area. Menlo Park, California was named in 1854 by two Irishmen, Dennis J. Oliver and D. C. McGlynn, ranchers and brothers-in-law, who erected a gate in front of their shared property to recall their hometown of Menlough (menlough is Gaelic for lake) in County Galway, Ireland. There was only enough room on the gate for Menlo Park, however, and when the Southern Pacific Railroad came through in 1863, the station was named after the gate and the name began its trek into officialdom.

When Schwalen's subdivisions first went on the market, they had deed restrictions against Mexican Americans (except for the subdivision sections south of Congress). These deed restrictions were eventually dropped since the area was considered by many Anglos to be the 'wrong side' of the tracks and the river (there was no "stable" bridge across the Santa Cruz River at the time). Nevertheless, the area did attract a significant number of Anglo families. In fact, the area was predominantly Anglo until after World War II.
(Sources: Alex Kimmelman, 7/16/97; Jeanne Bone, Menlo Park (California) Historical Association, 7/16/97; Thomas Sheridan, Los Tucsonenses: The Mexican Community in Tucson, 1854-1941, The University of Arizona Press: 1986.)

This area was named after an Anglo doctor who lived in this area for several years, a Dr. Kroeger. He served the area as a general practitioner. Jennie Morales, a longtime resident, said he delivered her as a baby. The area was also nicknamed Sal Si Puedes due to occasional flooding leaving only one or two exits out of the area. Area has a rural flavor; people keep horses and other livestock there.
(Sources: Tucson Citizen, 9/27/79; Jennie Morales, 7/16/97; Outline of Mexican American Education, Angel Ignacio Gomez and John Henry Chilcott, The Department of Learning and Staff Development Tucson Public Schools, 9/21/76)

In Spanish, barrio sin nombre means barrio without a name. We could find no stories on how it got this name. We did find out that this neighborhood is an area rich in cultural and archaeological resources, including the site of Warner's Mill and the mission community of San Augustín del Tucson and its convento.

In the thirties and forties, the area started to be settled by African-American homesteaders, including Hiram Banks (his property was later subdivided and called Hiram Banks Acres, bordered by San Juan Trail, Via Elenora, Calle Sombrero and San Jacinto Drive). Another subdivision was "A-Mountain Addition" -- this is probably where the neighborhood name comes from. Many African-Americans settled in the neighborhood after World War II because an African-American developer, James Benefield, was working to build low cost housing for veterans, especially minority veterans. A local philanthropist, Helen d'Autremont, was also dedicated to building and selling low cost housing in the area. She also built, with her own money, the community building in Vista del Pueblo Park, and donated the land for the Archer Center. In the seventies, incentives were offered to attract middle and upper income families to the area. By 1976, 68% of residents were owner-occupants. The Archer Center is named after Fred Archer, the Center's first director and an important community activist. One of the Center's primary goals today is to help area youth find jobs. Providence Services Corporation recently awarded $137,000 to the "A" Mountain Betterment Association and the "A" Mountain Watch Association to open a community center which will focus on mentoring programs for youth. The area just took third place in the 1997 Most Improved Neighborhood in the United States contest sponsored by NUSA-Neighborhoods, U.S.A. The area motto is: a community that works.
(Sources: Tina Gardner, 7/18/97; Barbara Elfbrandt, 7/10/97 and 7/20/97; "Short Neighborhood History of Vista del Pueblo and the Surrounding A-Mountain Area," under the auspices of the Tucson-Pima County Historical Commission: 1981)

"African-American people used to call it The Hill."
(Barbara Elfbrandt, 7/10/97)

"First of all, it's the oldest African American neighborhood in Tucson...and there are descendants there, I believe, from the Tenth Cavalry..."
(Alex Kimmelman, 7/16/97)

"It was the only place that African-Americans could buy a home without confrontation."
(Dr. Marion I. Roberts, 7/18/97)