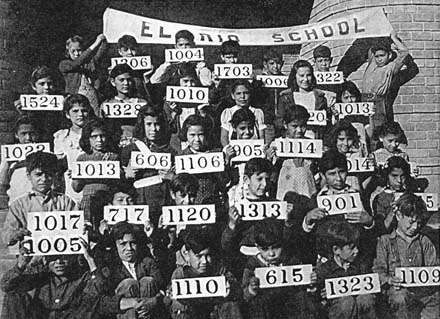 Stories my nana told me ...

"The school situation in Tucson is an unusual one in the fact that over 50 percent of the school children [are] children of foreign blood, Mexican and Indian, who could not speak a word of English at the beginning of the school year...Beginning English classes have been established in all these schools...."
(C.E. Rose, Report of the Superintendent, Tucson Public Schools, 1920-21)

These "Beginning English classes" were commonly known as 1-C. They were established in Tucson schools in 1919 and lasted through 1965. Children would be put in this program at the age of six before they could enter the "normal" first grade. In addition to teaching English, these classes were also meant to help "Americanize" the Spanish-speaking children. But as Salomón Baldenegro, a longtime Westside activist, puts it: "Americanization was based on a false belief that we were a foreign population...not true. We were indigenous. The U.S. came to us."

"Americanization" sometimes meant denigration, too. Sometimes children were taught, in indirect ways, to be ashamed of their Mexican heritage and culture. For example, Mexican food lunches were not allowed. You couldn't play Mexican games out in the playground. You couldn't celebrate Cinco de Mayo or any Mexican holidays in the school grounds. You couldn't speak Spanish in the school grounds and if you got caught you would get punished.
(Source: Thomas Sheridan, Los Tucsonenses: The Mexican Community in Tucson 1854-1941 The University of Arizona Press: 1986)

Here are some people's memories of 1-C

"You couldn't speak Spanish. So if one of your friends was behind you and you said apurate-hurry up-in Spanish...you would get hit 5 times per word. If you said two words, you would get hit ten times."
(Salomón Baldenegro, 6/19/97; attended Manzo Elementary, 1950s)

"We couldn't play any Mexican games, we had to play American games like Ring Around The Rosies. We couldn't call marbles canicas, we had to say marbles."
(Salomón Baldenegro, 6/19/97; attended Manzo Elementary, 1950s)

"I was in 1-C...and it was a good program....but what was wrong with it was a lot of kids didn't pass it...and they [were labeled] 'retarded' and had to go to a special class...and they weren't retarded, they were totally normal...but this would brand them for life....My biggest fear was that my brother or sister would go to that program."
(Jorge Lespron, 6/25/97; attended Manzo Elementary, 1950s)

How to Improve Bilingual Programs for the Future

"I think that Bilingual education is a good program. But I think... it still needs to be improved and that every kid should speak Spanish. Even kids that aren't Mexican because they live in a region that [used to be] Mexico and the language of Spanish is native to our land. They should also teach Chicano history in the schools-they don't now. Kids should learn how to speak English but they should not lose their heritage."
(Margaret McKenna, 6/26/97; attended Davis Elementary in the 1960s)

"I think that everyone in the U.S. should know how to speak Spanish. I think it is especially important for [Mexican-Americans] to [speak it]....I think it is a shame if you don't speak your language."
(Lydia Carranza Waer, 6/30/97; attended Davis Elementary, 1930s)

"All children should learn how to speak Spanish in elementary school. Make it easier for kids with Spanish as their primary language to learn English. [You should] avoid full immersion. How would you like it if you were thrown into a classroom and required to speak only German?"
(Jorge Lespron, 6/25/97; attended Manzo Elementary, 1950s)