Although wildly painted squadron insignia was common in World War I, true nose art did not occur until the Second World War. At the beginning of World War II, before the idea of painting an image on the skin of a plane arose, crews of the United States Army Air Force (USAAF) pasted pages from Esquire Magazine, Men Only, and Look magazine on the nose section, fuselage, and tail sections of the B-17 bombers known as Flying Fortresses. By the end of the war, there was such a demand for artists, who received up to $15.00 per aircraft, that nose art could be called an industry (Logan). The phenomenon peaked during the Second World War, but what were the reasons for this so-called "Golden Age" of nose art?

Nose art thrived in its infancy largely because servicemen had more freedom to alter their aircraft. Although the military never officially sanctioned nose art, it unofficially approved it as a morale-booster. It was a survival technique in a harsh environment. A little bit of levity and diversion goes a long way, and a measure of pride and enthusiasm comes from individual expression. Similarly, young men, who were generally under the age of twenty, could derive some comfort from images of women, mother, and home. Anne Josephine Hayward, a member of the American Red Cross Aero Club in England and a painter of nose art, challenges current objections to nose art as degrading to women or others: "Its purpose was worthy, to bolster military morale in a terrible time. The members of each crew came to feel that their plane and their painting were somehow special and would bring them luck, a safe return from hostile skies. The art may have been frivolous at times, but it was never anti-social" (Ethell, pp. 120-121).

The characteristics of World War II aircraft art and the fact that it flourished during that time are indicators of that era. The art reflects the attitude of the people involved in the war--both at home and on the front, and, in the case of World War II, the attitude was positive (Davis v. 3, p. 3). The images--often patriotic and sometimes propagandistic--clearly reflected the spirit of the times, the all-out American effort to fight the good war. The combat crews were backed by a unified, supportive public. This was a war with a clear objective, and one in which the whole country challenged a known evil. At first look, the art that was a product of the war seems to be nothing more than silly names and irreverent images. But taken as a whole, the images indefinably suggest an underlying determination of the country to right a wrong. 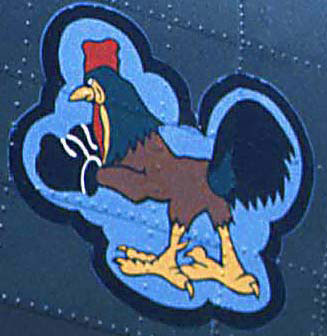 There were four main cultural sources of 1940s nose art. The first was the popular men's magazine Esquire, whose calendar page was the era's equivalent to the 1960s Playboy centerfold. The most duplicated nose art images were the product of Esquire's artist Alberto Vargas. Whether a Vargas copy or a Philip S. Brinkman original, pin-up art of the day was transferred to the side of an aircraft. Comic strip characters provided another source to be duplicated. Common images of the day were Burma, Madame Shoo Shoo, and Dragon Lady, characters from Milt Canniff's "Terry and the Pirates," and Miss Lace from "Male Call," a strip he created for the troops' daily newspaper. Dog Patch and Moonbeam McSwine were two images from Al Capp's "Li'l Abner" strip copied with regularity. The 56th FG and the 47th FS of the 15th FG, known as the "Dogpatchers" had an entire series of nose art creations based on "Li'l Abner" (Ethell, pp. 71-72). The line between art and life blurred as professional artists Canniff, Capp, Herblock, and Sgt. George Baker (creator of "Sad Sack") contributed art work in the form of posters for the military.

Inasmuch as the American movie industry promoted the war effort and the culture was infused with Hollywood, it is no surprise that images from the movies and female stars were the inspiration for much of the era's popular art. Rita Hayworth's image from a 1940s film, in which she sings "Put the Blame on Mame," is transferred to a B-24 Liberator named "Flamin' Mamie" (Logan). Hollywood celebrities were photographed in front of aircraft and with combat crews, making the connection complete. Like Hollywood, the Disney industry was pervasive in American culture and it influenced nose art in a number of different ways. Combat crews copied Disney cartoon characters because they were suitable subjects for humorous and patriotic themes. Disney's influence also included studio artists, who joined the military and then contributed their talents to the creation of nose art. Disney Studios and the U.S. government had a history of cooperation. At the beginning of the war in 1939, Walt Disney and his artists designed and painted squadron and unit insignia. Disney raised the spirit of the troops when he transformed the "once staid military heraldry format created during World War I" into inspired designs (Ethell, p. 141). By the end of World War II, Disney's five-man staff assigned to insignia completed over 1,200 unit insignias, never charging a fee to the military (Ethell, p. 142).

Another Disney effect was tied to the studio's role as producer of war propaganda. Distinct from the art painted by the crews between missions was the variety painted by Disney artists at the time of production of the aircraft. The close proximity of Disney studios in Burbank to both Lockheed's main and subsidiary plants prompted a collaborative effort between the U.S. government and Disney. Studio artists created art that promoted the country's involvement in the war as the planes came off the assembly line. Not shying away from racial slurs and derogatory commentary, this art was meant to place the enemy leaders in a negative light--"often in a much nastier light than . . . art work applied by combat crews" (O'Leary, p. 49).

As the pin-up pervaded the war effort, it naturally became central to nose art. Nose art's portrayal of women in the World War II era can be characterized as free-spirited and daring. Perhaps reflecting a freer attitude regarding sexuality in the American culture, artists during the 1940s were not subject to censure as they were in later times. While the navy and marines commonly held to a restrictive approach to aircraft markings, the army allowed room for freedom of expression. Army Air Force Regulation 35-22, of August 1944, signed by the Secretary of War, authorized decorating any air force equipment with individual designs and, indeed, encouraged it as a means of increasing morale (Ethell, p. 25). The farther from headquarters, and the farther from the public eye, the racier the art. For instance, aircraft based in the South Pacific were more likely to have nudity than those in England (Cohan, p. 65).