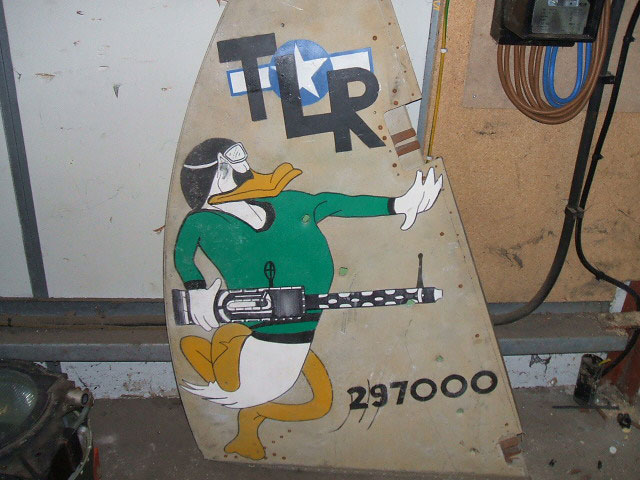 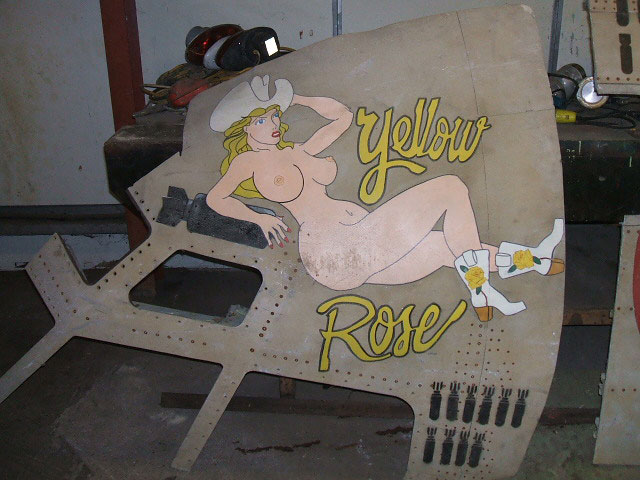 We are most appreciative that Reclamet has given us permission to include these images in Military Aircraft Nose Art. 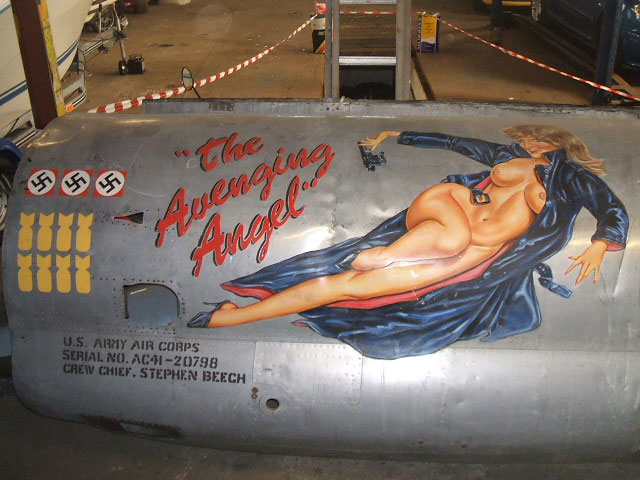 We also have a question from Mr. Hughes who asks for assistance identifying "the likely aircraft sections and/or a brief history to these particular images." Can you tell by looking at the panels what type of plane it was painted on?

Thanks go to Chris Brandt in Australia who emailed us in January 2008 that this section of Carolina Moon is from a B-17G Flying Fortress. 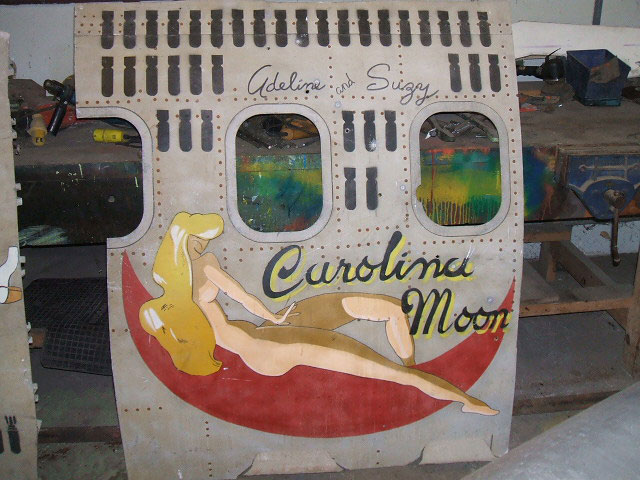 update March 19, 2012: received an email from someone who wrote the he has"been collecting and documenting WWII Nose Art from all kinds of planes for quite some time. I prefer to remain anonymous though but I can say that the nose art shown on that page (all of it) are replications or renditions of the originals." With that preface here is what he emailed.

Chris Brandt appears to have identified "Carolina Moon" as being from a B-17G...and, indeed, he would be correct if that were the actual "Carolina Moon". However, the aircraft part in the picture is from a passenger plane.
In order of the collection as listed on your webpage:

The duck with the gun - Section Unknown - Artwork is a take on a somewhat famous Donald Duck image with Donald carrying a bomb (created by Disney artist Hank Porter). The one used on this tail-piece is a copy of a larger version found on a B-24 Liberator named "Dodgin' Don" that had a bombing incident and was salvaged in 1944.

Yellow Rose - as shown is from a Boeing B7xx (likely a B707) series - The paint job is a copy of the original CAF B-25 "Yellow Rose" nose art before there was a complaint to put clothing on her. The Yellow Rose paint scheme was invented for the plane some time after 1981.

The Avenging Angel - is most likely a part from the nacelle of a B707 using the Pratt&Whitney JT8Dx engines - The name Avenging Angel was actually on a plane from WWII, but it originally resided on a Handley Page Halifax (similar to a Liberator, but British built). This is a nice piece but while in the style of WWII nose art, the image used would have fit better if it were a plane from the US bombing of Libya in 1986, it definitely is not the style used from the 40s, 50s or 60s.

Carolina Moon - probably from a Boeing B7xx (likely a B707) series. - The image is much smaller than the original and window placement suggests a Boeing B-7xx series was likely cut and utilized for the part to create the replica. It could also be from the same plane that some of your other material from John Harris' collection appear to be part of.

The designs are typical of WWII nose art. U.S. Army Air Corps is stenciled above the serial number on The Avenging Angel. A search in a serial number database for 41-20798 identified its plane as a Ryan PT-22, a single engine monoplane used for training during WWII. However, you can tell from the image that the The Avenging Angel was a bomber. See Joe Baugher's USAAS-USAAC-USAAF-USAF Aircraft Serial Numbers--1908 to Present for a review of serial numbers in theThe Display of Serial Numbers on Aircraft section.