Korean War: A Loss of Innocence

Nose art is essentially a wartime phenomenon, in part because of tighter peacetime restrictions, but also because in peacetime the need for personalizing aircraft no longer exists. When World War II ended, so did, temporarily, the art. The dropping of the atomic bomb signaled the dawn of a new age, and with it Congress created a new air force, which ruled against unauthorized paintings on aircraft, except for elite units (Davis, v. 3, p. 4). The art did resume again in 1950 with the United States' involvement in the Korean War, but not with the same intensity it had in the previous conflict.

Although only five years later, the character of nose art changed subtly, reflecting a changed attitude of the public and soldiers alike. Unlike World War II, the art that the Korean War generated did not focus on defeating an evil, because the threat was not as real. It reflected a general lack of enthusiasm for the war. "Patriotism was replaced by the U.N. mission" (Davis, v. 3, p. 4). Instead of a clear enemy to rally against in the figures of Hitler and Mussolini, the country now looked to defeating an amorphous and unknown force called communism in a distant and completely foreign land. The aircraft named "The Red Eraser" bears this out.

Korea was the "first of coming wars in which men were called upon to fight, but not win for a nation apathetic or hostile to war" (Ethell, p. 149). The mood of the country had changed to one of confusion and uncertainty about its purposes. This was reflected in the aircraft art of an anti-war tone, entitled "United Notions," and "Purple Shaft," which contrast with the patriotic still in use, such as "Old Glory." One thematic distinction from World War II was that few aircraft were named after the music of the day, because "the song titles reminded everyone that they didn't really want to be there" (Davis, v. 2, pp. 3, 8).

Themes such as the mission, home, good luck, and women continued as in World War II, but the representation was not as eye-catching or as elaborate. New characters such as Dennis the Menace and contemporary movie stars like Jane Russell and Marilyn Monroe made their appearance. A few aircraft along with their art, like "The Dutchess" from the 35th Fighter Group, survived World War II to reappear in Korea. Some names and art work, such as "Desert Rat," refer to the pilot's previous World War II service, in this case, North Africa (Dorr, v. 2, p. 9). At Pusan, there was a twist in the old tradition, as pin-up art from Esquire was painted by a Japanese artist while the aircraft was in rework in Japan (Ethell, p. 152). As in World War II, nose art displaying nudity was not an issue unless seen by civilians.

While nose art of a sexual nature may not have been as common in Korea as in World War II, the images of unclothed women revealed a new frankness. Except for figures styled upon Gil Elvgren's calendar art, the depiction becomes more explicit, less romantic, and less idealized, leaving "little to the imagination" (Ethell, p. 148). See examples from the 483rd Troop Carrier Squadron C-119s at Ashiya Field, Japan, shot ~1952. Does the change in character indicate that American society had lost its innocence and idealism in the past decade? 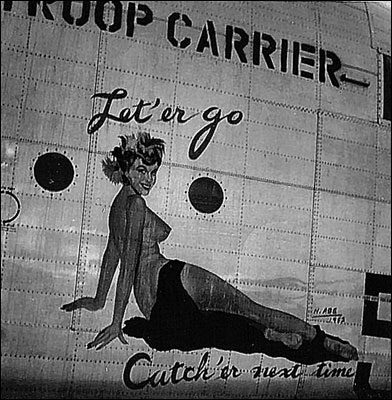 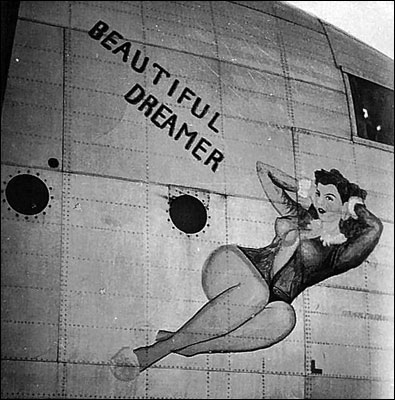 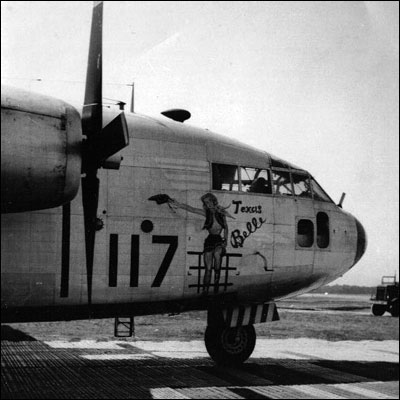 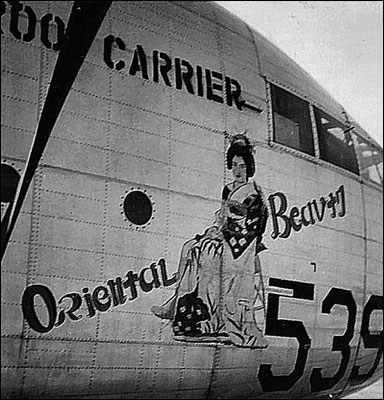 Wikipedia includes this information on the C-119.

The Fairchild C-119 "Flying Boxcar" was a U.S. military transport aircraft developed from the World War II Fairchild C-82 Packet, designed to carry cargo, personnel, litter patients, and mechanized equipment, and to drop cargo and troops by parachute. The first C-119 made its initial flight in November 1947, and by the time production ceased in 1955, more than 1,100 C-119s had been built. Its cargo hauling ability earned it the nickname "Flying Boxcar ."

Read the full article in Wikipedia to learn more about the C-119's history and interesting facts about the plane.