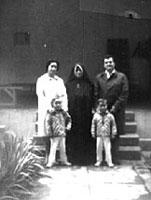 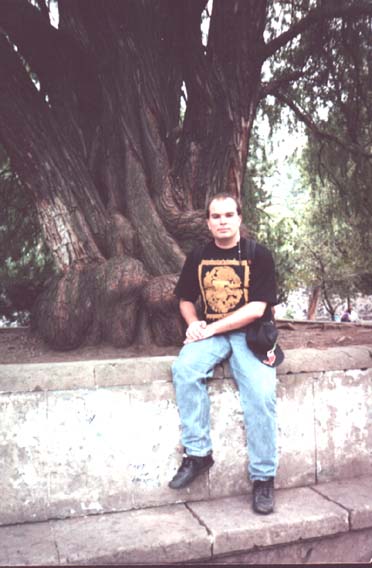 And so it was that we packed our backpacks for a quick, few-day jaunt, and set off toward the bus terminal and Cuernavaca. En route, we stopped at a museum, which was closed because it was Monday. There was a tree very near it. An old, strong tree it was, full of Life and strength. Dale told me that he had seen it before.

On June 31, 1520, the Aztecs were to hold their most important ceremony, the Toxcatl, excluding the human sacrifice at the express command of the Spaniards. Reports conflict, but the Spaniards may have been told that there were going to be sacrifices and that THEY were to be the victims. Whether this was pure bloodlust or whether they truly believed that their lives were in danger, the Spaniards surrounded the square, drew their swords, and rushed the celebrants. As a result of this massacre, the Aztecs were very put out, and retaliation was not long in coming. Before long the Spaniards were besieged in the palace of Axay´catl. That night, under the clement fog and mist and darkness, he and his soldiers, laden with all the gold and jewels they could carry, escaped and slithered silently along for two ever-lengthening miles. An old woman drawing water spotted them and gave the alarm and suddenly the Aztec warriors were upon them. The battle was joined. The blaring of conch shells, the clanging of armor, the Aztec whoops of battle and bloodletting led to utter chaos and the Spaniard ranks thinned, then broke, as every man tried to save his own skin, literally, from the Aztecs. Thus they tried to ford the river, sinking to the bottom even as they tried to free themselves from their precious ballast. Eventually, the rest of the men, running on the backs of their comrades, escaped to the other side and to freedom. In all 450 Spaniards and some 4000 indigenous allies fell -- the worst setback Spain had theretofore seen in the New World. It is said that Cortés was so stunned and grieved by this turn of events that he sat under a great tree and wept.

This was the tree at whose foot we were sitting. Once I'd heard this, I had Dale take a picture taken of myself with the ancient reminder. This was not a time for reticence, this was time for Bearing Witness.

Part of which site
The Pentland-Salcido Family: A Sonoran Family History