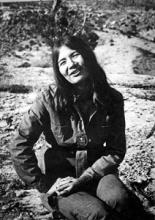 Running on the Edge of the Rainbow: Laguna Stories and Poems

When I talk about the oral tradition or about the way the people at Laguna take delight in relating stories of incidents that happened either recently or in the past, people say, "Well, that's gossip." And in an Anglo-Saxon tradition one of the things that religious leaders are always warning the people about is, "Don't gossip, gossip is bad." Even now I run into people professionally who feel that way. They don't like to talk about things and people. They like to talk about the weather and the stock market or something—something not having to do with people. But it's very important to understand the function that this kind of telling and retelling of incidents has. It's what holds the community together in a way that goes beyond clan relations and blood relations.

If you listen closely when someone is talking about something that happened two weekends ago at Paguate after a dance, very quickly, other stories that occurred in other places or incidents that occurred in that same place ... in other words, whenever a place or a family or a kind of activity, whenever some things like that are related, at the same time, all other kinds of stories are remembered and told. And it's very important. It's not just a matter of it being gossip or idle. There's nothing idle . . . oftentimes the two words are linked: idle gossip. There's nothing about this at all that's idle. It's a very intense sort of thing, this recalling.

By recalling these other stories which are somehow linked to this place or to this person or to this kind of activity, it begins to put everything into kind of ... not just into a context, but it puts things into proportion, and it begins to link the people, individuals. It begins to link the individual to the rest of the people in a kind of very essential way so that the same kind of thing that just happened to you last week, well, we'll tell you about the other people it happened to and other people and all of a sudden you're not alone in what happened.

You can begin to laugh at things that happened. I guess another function in all this is helping, enabling, the individual to begin to see things not just as me, alone kind of way, but to begin to see one's experiences, one's fate, one's tragedies in terms of something not just yourself but everyone else, so that it brings everyone closer, and it makes you seem much more like a part of the stories. And the next time something happens, your story's going to be right there with all the others, and so these things link and it helps the individual right now. It brings the individual in touch with things and people that happened a hundred years ago." There's sort of a continuity. In other words, this telling is a creating of a kind of identity for you so that whatever kind of situation you find yourself in, you know where you are and you know who you are. It's that whatever you do, you never feel that you're alone, or you never feel at a loss for. , . . You're never lost, you're never lost.

Laughing and Laughing About Something That Happened at Mesita

— The two women with Silko on the porch of her house are Joy Harjo, poet and author of Last Song (Las Cruces, N.M.: Puerto del Sol, 1977), and Sandy Johnson, a Laguna woman from Paguate village, Harjo's daughter Rainy Dawn also appears in some of the porch scenes.

— "Laughing and Laughing About Something that Happened at Mesita" has not been published in this form. See Storyteller, pp. 89-93 for another version.

— Elsie Clews Parsons' work at Laguna may be seen in a book edited by her mentor Franz Boas in Keresan Texts and in her collection "Laguna Tales." See Related Readings.

— BAE refers to the publications of the Bureau of American Ethnology, one of the major series in which Boas and his disciples published their work on American Indian story and song.

— "Toe'osh: A Laguna Coyote Story" is published in Storyteller, p. 236. It is dedicated to Acoma poet Simon J. Ortiz, author of Going for the Rain (Harper and Row, 1977), Howbah Indians (Blue Moon Press, 1977), and The Good Journey (Turtle Island, 1977)
.
— The conference Silko refers to was "the National Center for Audio Experimentation Writers' Workshop." It was held at the University of Wisconsin at Stevens Point. Selections from poets at the conference were published in The Greenfield Review, 3 (1973).

Few viewers of this videotape could doubt that Laguna stories entertain and delight the people, but Silko tells us that stories have more important functions than entertainment. They "hold the people together," and they continue to be told at Laguna because they work in this important way. Stories mold the incidents of individuals' lives by relating them to the slow moving wisdom of the collective life. Stories make personal experiences less personal by traditionalizing them.

The first poem Silko reads on this videotape, "Storytelling," is a good illustration of this process. The poem turns on the relation between Kochinako, Yellow Woman, a major character in Laguna storytelling tradition, and a series of recent happenings at Laguna. Time and again in Laguna stories Yellow Woman leaves her family in the village to go to the river for water. There she encounters one katsina or another, leaves her water jar on the river bank, and runs off with the katsina to a world of supernatural adventures. In this poem and in her short story "Yellow Woman" Silko shows how many contemporary stories that we might write off as rumor or gossip are in fact more recent and immediate versions of the Yellow Woman's adventures. By connecting these recent happenings with the old-time stories of Yellow Woman, Silko traditionalizes them. Her poem "Toe'osh: A Laguna Coyote Story" works in much the same way. There she finds images of the Laguna trickster Coyote in a series of contemporary happenings on the Laguna reservation. She recognizes a continuum between the old stories about Coyote and more recent tellings of the adventures of contemporary Lagunas. In both "Storytelling" and "Toe'osh" Silko shows how Laguna stories hold the people together.

Material for this videotape was recorded March 26-31, 1976 at Laguna, New Mexico. All original film and videotape is archived at the Southwest Folklore Center, Univ. of Arizona, Tucson, 85721.

The best print complement to this videotape is Silko's book Storyteller (NY; Seaver Books, 1981). It should be required reading for all who view this videotape. Silko's novel Ceremony was published by Viking Press in 1977.

Part of which site
Words & Places