We were the best team. 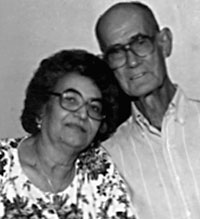 Were you raised in Barrio Anita?
Yes, I was raised in this house; 632 N. Anita Ave.

Who organized the Tigers?
It was organized by the Oury Park players.

Who were your coaches?
My coach was Emilio and Chilili Molina.

What year did you start playing?
I started playing in 1931. I also played with the American Legion. I quit playing in 1936 and came back in 1937.

Who did the Tigers play against?
The Tigers played against the Aztecas, the Ratas, any pick-up teams from the Yaqui Village.

Who were the other Tiger players?
Some of the guys I played with were Fuentes, Rosas, Bonivelos, Salamon, Dalton, Bustamante, Rodriguez, Saladin, and others.

Were all the Tigers from the barrio?
Most of them were, but a few were from other barrios. We all had something to do with Barrio Anita and Oury Park.

Do you have any special memories of Oury Park?
We had little scuffles with each other. We would start fights, but they would be stopped.

Did the Tigers win most of their games?
We were on top of the league. We won most of our games.

What days would the Tigers play?
Mostly on Sundays. We would play from about eight in the morning until we didn't have light to see anymore. When they put in lights we'd play at night.

Were all the games at Oury Park?
Most of the games were played at Oury because in the beginning that was the only park to play. Then a little later there was a place on Third Street.

Was the neighborhood supportive of the team?
Yes, the barrio was very supportive. For example, when the park needed to be cleaned, the people would come and help clean. People from the barrio also went to the games.

Do you miss playing for the Tigers?
Yes, I do very much.

If the Oury Tigers still existed would you play?
Oh, of course. Why not? We were the best team during the 1930's and 40's.

What position did you play?
I played all the positions, like catcher, pitcher, first base, second base and all the other positions. I was best at catcher, I was not so good as a pitcher.