We enjoyed what we had. 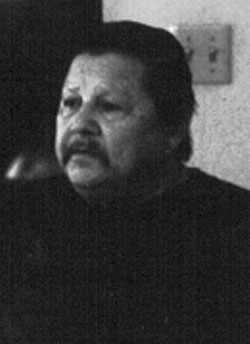 When and where were you born?
January 27, 1934. I thought I was born in St. Mary's Hospital, when, actually, I was born in the little house there, across the street from the chinos.

What was your address in Barrio Anita?
874 N. Anita, that was where I was born. It was a triplex. Three apartments in front and three in the back, by the railroad tracks, and in the back our dad had tents. We moved out in '48. We didn't move too far from there.

Who were your parents?
Juan and Jesse Valenzuela. They lived in the same house that I was born in. I thought I was born in St. Mary's Hospital but my mom told me, "No mijo, you were born in Barrio Anita in a house. No, we didn’t have a doctor, we had a partera, a midwife."

Were your brothers and sisters born in your house?
Yes they were. My sisters and brothers are Tony, Mary, Bertha, Johnny, Bobby, and myself.

How long did you live in Barrio Anita?
In Barrio Anita, for 15 years. I have three kids. After the army I got married to Esther "Chata" Salcido in '56. We have two boys and a girl. Arnold Jr., Mark Anthony, and Cindy. I have two granddaughters, and a great-grandbaby.

Would your children come to Barrio Anita to visit?
Yes, they would visit my grandma. We used to play run- around games. We had no radio, no TV, and no Nintendo. We were very close. We used to chop wood. We had dirt floors. We used to sprinkle the floor with water so the dirt wouldn't come up.

What schools did you attend?
I attended Davis and Roskruge. We hardly spoke English when we were in school; it was embarrassing. We didn't understand what the teachers were saying. It's hard to grow up. At our home our parents didn't speak English, so how could we learn? It was really hard. Only at school they would scold us if we said something in Spanish. English only, I remember that. It was the hardest thing, though. I didn't know how to speak any English.

Did you finish school?
No, because in those times you had to quit school and support your sisters and brothers. I think I was about fifteen when I finished school. Then I joined the National Guard, then I got drafted when I was eighteen to the real army. There weren't job opportunities like there are now.

What religion did you practice?
Catholic. I went to Holy Family Church every Sunday when I was in the service. We were very good Catholics.

Who were your friends?
The Questas, Alex Questas, Billy Cruz, Jesus Martinez, Pete Cuestas and Gilbert Soto. It's hard to say 'cause I used to hang out with everybody.

Where was the hangout for you and your friends?
We used to go dancing at the Casino Ballroom in the '50s. At the Del Rio Ballroom we would go dancing too. En la noche everybody used to sleep outside during the summer; and those old people used to tell us scary stories so that we wouldn't leave. We didn't mingle with the girls, just the guys. Only when we played "furniture" with the girls. We were like the little rascals, no girls allowed!

Who was most well known in the barrio?
Jesus Martinez. I still see him around and I tell him, "You know why I used to hang around with you?" And he said, "Why?" I told him, "Because you were the only guy on the block who had a bike." (Said jokingly) Ha! Ha! Ha!

What kind of music did you listen to?
In the 1940’s and 50’s they had no rap. Elvis was my favorite. You know, like "The Ink Spots," and "The Platters." They were good, I liked them. Also, "The Dorseys." A lot of young people like that music still.

What was the style of clothes back then for guys and girls?
Little cuffs, and we used to wear double-soled shoes. Around that time the girls would wear long dresses and pedal pushers.

What kind of transportation did your family have?
My dad was the only one who had a new car in the barrio.

What games did you play at Oury Park?
Sports, baseball, basketball, football, and we'd go swimming at night when the gates were closed.

What was the biggest challenge for you as a teenager?
Working for myself. I didn't want no little jobs that didn't pay. That's why I joined the Guard, and when I joined the Guard I stayed there two years. Then I found out that if you missed five or six meetings you would get drafted to the army. That's what I wanted. I wanted a challenge. An eighteen year old kid from Barrio Anita in an ocean, in Germany. I found that more challenging.

What memories do you have of Barrio Anita?
In the summer we used to get on the railroad tracks with our slingshots and go to the pompitas. Way the heck out there in the hot sun. We used to go to Oury Park a lot. When they used to close the swimming pool where we used to go. We used to sneak in there, my brother and I. Tony would go with no calzones. We would play basketball. There was nothing to do. There was clean water; we had a good clean life. We enjoyed what we did have. I used to shine shoes when I was ten during the war. Boy, I used to do a lot of work there, work in the fields. I used to sell oranges for a dollar a day. I worked at the Martin Drug Warehouse, the drug store. I worked for the Santa Rita Hotel. Our top pay was $4.60 a day.

What do you think was best about the people in the barrio?
Everybody used to get along real good, like a big family. Oh let me tell you, from St. Mary's to Speedway everybody knew each other. Kids I used to hang with from Barrio Anita were los Carbajales, los Questas, the Ruizes. Some of the biggest families were the Encinas, the Caranzas and the Leones. It was fun growing up in those days. It was really fun, everybody knew everybody. Everybody was real close to everybody, lots of families.

What would you say are the biggest changes in Barrio Anita?
I think people are living better now then we used to. There's more income, and more jobs. Sure, I've been through there. I don't forget my barrio. They're doing better, the houses, they're fixing them. The economy is good for sure; there's better jobs.

Did you enjoy living in Barrio Anita?
¡Sí! I still go there sometimes.