We trusted each other. 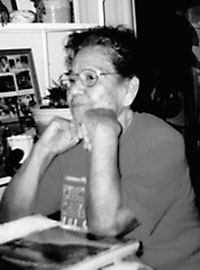 What was your address in Barrio Anita?
628 Anita Street. I moved away in 1945, because I got married. I lived in Barrio Anita for twenty seven years.

Who were your parents?
Amanda Castillo Canales and Juan Bustamante. My mother owned her house on Calle Anita, so she was there quite awhile. She was a registered midwife, and she delivered babies in Barrio Anita. My dad was a miner, so he traveled quite a bit.

Who were your siblings?
I had four brothers and three sisters. My oldest brother was Jesus, Salvador, Jose, Francisco, and my sisters Angelina, Dolores, Nequlagua, and then myself. We were a family of ten.

Did you marry?
I was married for 59 years to Rudy Bustamante. I was in high school and I was walking home after school. He and I just happened to be walking home at the same time and he asked me, “Do you want to walk with me?” So I said,“Yes.” That's when we started being friendly.

Do you have kids?
I have two kids, Rudolfo and Juliet Bustamante. Rudy was six years old when we moved to 628 Anita Street, it was my mother’s house. Then we moved to our friend’s, the Valenzuela’s apartment at 616 Calle Anita.

What schools did you attend?
Davis School, Roskruge, and I graduated from Tucson High in 1936.

What would the youth wear?
Skirts, blouses, and oxfords. The dresses weren’t short, they would be below the knee. At that time we wouldn’t wear shorts or slacks.

What kind of music did you listen to?
We used to like Western music and Classical music. At that time we had a piano teacher and she would let us listen to Classical. The good ol’ music.

Where did people go to dance?
At that time we would go to a salón on Congress Street. It was a ballroom under a theater and there was this basement, it was called a selda. Yoyo Sket, Tony Corral, and Francisco Kintel; at that time they were the best musicians in Tucson. It was free for girls and the boys paid ten cents. They were usually open on Fridays, Saturdays, and Sundays.

What games did you enjoy playing?
Baseball at the time. Volleyball, dodgeball, and soccer. We used to call soccer “spit ball.” I played for Oury Park, and, at that time, there was a coach named Lou Adams. He and us girls made a girls team. Girls could go out for sports, so there were actually two teams in Tucson, Arizona. We were called “Las Chamacas.” The girls were Dora Dalton, Irene Muñoz, and Bertuña Henandez. At that time I was the talk of the town, because I was married and still playing ball. All of us practiced at Davis School. For awhile there was a team called the “Rainbow Girls,” I used to play with them. At night Dora and I would play baseball at Tucson High with the guys. When they were short of players they would let us play outfield. We had plain, nice, fun. We used to watch the baseball games every night at Tucson High. A lot of people would attend the Tigers’ games. I remember Oury Park would get so crowded. Oury Park was the best thing that happened to the barrio, because we didn’t have any place to go and play. Then there was a club, swim-ming pool, and a wading pool for children. It was the nicest place. We had fun.

What memories or special events do you have of Barrio Anita?
When we used to play in the street and go swimming in the canal. Dora Dalton was my best friend; all we did was go swimming, play baseball, bike riding, and skating on Calle Granada.

What would you say are the biggest changes in Barrio Anita?
The biggest change is Davis School. They added more buildings. Also how they closed Calle Granada. Now the streets are paved, the ditch is gone, the cotton fields are gone, and all the buildings and houses are gone.

What do you think was best about your barrio?
At that time we used to trust each other. We slept with the doors open. Everybody knew we left the key in the mailbox. I felt safe then. We used to go to Oury Park to go watch the boys play baseball, and we played too. In that time it was a peaceful place to live. People were more cooperative back then. We weren’t selfish, we weren’t greedy. We made it a peaceful life, we were always happy. We didn’t try to keep up with Joneses. Those things you see change when we look back. 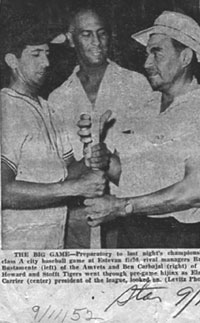