You knew all your neighbors. 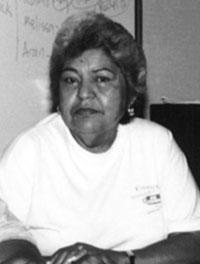 What is your full name?
My full name is Alice C. Gonzales. My nickname is "Negra" because when I was a little girl I had really kinky hair, and I was always in the sun, so I was as dark as dark could be. Everybody thought I was a negrita.

Where were you born?
I was born at home on April 30, 1940. I think it was on Williams Street. The doctor who delivered me was Dr. Allen. I think my grandmother was there too.

Who were your parents?
Cornelio and Eulalia Torres, her nickname was "Chichí."

Who were your brothers and sisters?
I have two brothers, Cornelio and Martin Torres. I had a sister, Neli Torres Villa but she passed away.

What was your address in Barrio Anita?
I had so many of them. One of them was 614 N. Contzen, in front of Oury Park, then 924 N. Anita, then I lived on Van Alstine. I had to stay in the neighborhood. I lived in the barrio for thirty four years. 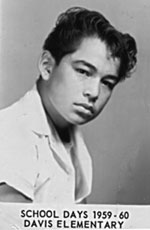 Did you marry?
My first husband was Ralph Cruz. Then I remarried to Armando Gonzales and I've been married for twenty five years. He used to live in the barrio and his mother Theresa Gonzales still lives right on Anita. We knew each other since we were kids; he used to be my brother Cornelio's best friend.

Do you have kids?
Yes, I have four kids. Diane Cruz, Olga Cruz, Ralph Cruz, and David Gonzales. This is the fourth generation of Davis students; my mom and dad both came here, then I came, my kids came, and then my grandkids came to Davis.

Do you remember not being allowed to speak Spanish in school?
Do I remember? I sure do. I got a good spanking at John Spring for speaking Spanish. They kept bugging us while we were out playing volleyball, and you knew you weren't supposed to speak Spanish, and you'd open your mouth and out came Spanish. That time I got hit for a good reason: a nasty word came out of my mouth, they sent me to the office and I got two swats.

Who were your good friends?
My good friends were Frances Encinas, Francis Lemones, and Socorro Garcia. We went to Davis and John Spring together. We used to fight the boys, we would bunch up and pound them and take their lunch.

What would the youth wear?
In those days, we used to wear oxfords, wool bobby socks, tight straight skirts with a slit in the back, pedal pushers, twin sweaters, and a little bandana on the side of your neck. The guys would wear khaki or Levi pants, white shirts, and loafers.

Who was famous when you werea teenager?
Pedro Infante; he was like a charro. He was my favorite movie star and he used to sing really pretty.

Where was the main hangout when you were a teenager?
We would all hang out at Oury Park. We would ride the swings and they had the slides. We would watch the baseball a lot, and a lot of the kids would go swimming. On Saturday mornings we used to go to the Mickey Mouse Club and Superman; they had it at the Fox theater. We would all go together, both Frances and myself.

Where were the dances held?
Well, they had dances at the Victoria Ballroom like on Saturdays and Sundays. They would charge ten cents per couple and all the records that you wanted to dance to. They had tickets, and the guys would buy the tickets or as many as they wanted. They would go and ask a girl if she wanted to dance and she'd say, "yeah." They'd both go up and they had somebody standing right there in the entrance of the ballroom and you would give him your ticket. They had a regular orchestra for music. The guy would always have to pay.

What kind of transportation did your family have?
The bus, but in those days it was called Laos, or walk. The buses were old but they got you there, the only place you could go was downtown. They had the movie theaters, drug stores and everything downtown.

What were your moral views as a teenager?
I think we didn't have much ambition in doing much we wanted to, of course, but we didn't have the opportunities like kids have today. Almost none of the kids went to high school; they all wanted to get out of the house and get married. The only thing I really wanted to do was leave high school. I just wanted to stay home and help my mom out, she used to work hard in those days. I didn't have ambition to look forward to going to school and becoming somebody. What we really tried to do was be good, that was the best thing to do. To behave, not to mess around with your parents, and not to be mean to other kids.

Who were the neighborhood activists in those days?
Frank Soto and his wife Julia were people always trying to get people to vote, see if there was anything he could do for you, or, if there was a program that the barrio didn't know about he'd let you know. Arturo Cocio used to always be out there with Frank. I remember David Herrera, he used to be at Oury Park all the time. He used to help teach the kids to play sports.

Did you have encounters with ghosts in Barrio Anita?
My grandmother used to live on Williams Street and they used to play cards at night and every so often they would hear La Llorona crying. She would just cry, "Ay mis hijos." They don't hear her any more, so I guess she found her babies. Another story I have is about my old house in Anita, where my daughter lives now. My mother told us when she was a little girl she used to stay with her grandmother, and at night she couldn't sleep because she would see this little Indian woman grinding corn right in the corner of the room. My mother told her grandmother about it and she would say, "Estas loca muchacha, estas loca." She kept seeing that little Indian woman sitting there, and finally I guess her grandmother got tired of listening to her story, and so she decided she was going to dig right there in that corner. So she dug there and she said she found a ceramic pot, and it was full of coins like a treasure. When I lived there my son was about seven, and we had bought him a train set for Christmas, and we put it on a big table out in the back porch. He would not play out there, because he would hear footsteps like an old lady shuffling her feet in the back porch. That was right beside the kitchen where my grandmother pulled out the pot of coins.

Do you have any special memories of the barrio?
Well, people used to have a lot of parties at home. The whole neighborhood would get invited, and all the kids would play. They would have piñatas, cake, and ice cream. Usually, the mothers would bake a cake, and would make little bags of candy. My best memory is when I made my First Holy Communion at Holy Family; I was about eight.

Do you think times have changed?
You knew all your neighbors from one end of the street to the other. When you went to the store, you didn't have to lock your doors. During the summer, you just had to put the little latch on the screen door. Before, when you were sick, you always had a neighbor make the sick person a sopita de pollo. They helped each other out a lot. When somebody died, they had their wakes at home. They had the body in the living room, and people would stay there and pray all night. They would have menudo and coffee. Kids would usually play in the middle of the street, run in the park, play in their backyards, play marbles and tops, or get together and play ball, and they were safe. There are very few old people left in the barrio.

Did you enjoy life in Barrio Anita?
I really enjoyed it. It makes me wish that I would have stayed here. I sit down and daydream and think if I was in the barrio, I would not be sitting here in the house. I would be walking around the neighborhood talking to my neighbors.