Chilili was the first coach of the Tigers. 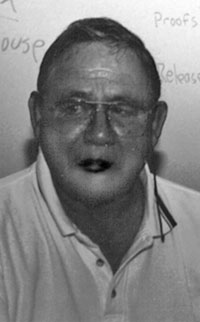 Pete Molina's father, Chilili, was the first coach of the Oury Park Tigers.

When did the Oury Park Tigers begin?
It had to be 1931 when the Tigers started. The Tigers were the most continuous team there was in Tucson: They lasted longer than the Ratas; the Aztecs broke up; the BFE broke up; so did the Southern Pacific Rails and El Centro, and the Tigers kept going on.

Who first organized the Oury Park Tigers?
Chilili Molina, Fito Bustamante, but Chico Tellez was more vocal, he was more like an interactive guy. They were talking about where they would play and they cleaned the field out and organized the team.

Were all the games at Oury Park?
No. We used to go play at Eagle Field (Santa Rita Park), Aztec Field, and Riverside Park.

Was the team just people from the neighborhood?
Originally, yes. The people on the other side of the the river really hadn't settled yet.

Did many people attend the games?
Yes, people used to walk all the way from Barrio Historico and Barrio Libre, and on Sundays they all used to come dressed up to come all the way over here. Un señor by the last name of Molina would bring a wagon with all the flavors of cimarronas, it was really a treat, you know. He would push his wagon, a very powerful wagon with little 'fridges. You could smell the strawberry, lime and banana. He would give you a scoop for a nickel. It was real nice.

Were there any fights during games?
My old man, Chilili, got into a fight once. There was a lot of hecklers and my dad took the game seriously. I wasn't there, this is what they told me: somebody said something to my dad that he didn't like, they called time out, and they went out there and they had an argument. My Dad got the best of him according to eye witnesses, he knocked him down, he was a big guy. He happens to be my neighbor's step father.