When Bertha Rico was in third grade she and a friend were walking out of a classroom speaking Spanish. She knew a teacher was behind her but she kept talking. The teacher turned her around and slapped her twice in the face. She started crying and ran home as fast as she could and told her mom what had happened to her. Her mom said that she was going to go over to Davis and talk to the teacher. Bertha begged her mother not to go and said, "I wasn't supposed to be speaking Spanish anyway."
Source: Bertha Rico interview, 6/30/98.

On April 12, 1901, three board members of Tucson Unified School District convened at Safford Middle School and decided to construct three new elementary schools. One of the board members suggested that the new schools be named Davis, Drachman and Holladay. The motion passed immediately. The board decided Davis would be located on the "northwest side" of the city at St Mary's and Granada (the southern edge of Barrio Anita).

Tucson School Board members attempted to close Davis in 1974 due to a 50% decrease in enrollment within the preceeding five years. Parents and children boycotted the school for one day to protest the proposed closure and the School Board decided to keep the school open. A lot of people believed that the attempt to close the school was an example of racism because Davis was a minority school and people felt the School Board acted like the elementary school wasn't worth fighting to keep open.

A 1978 desegregation settlement involving Davis, Drachman and Carillo Elementary Schools ordered the district to bring facilities and curriculum up to District-wide standards. In order for the three targeted schools to stay open, educational improvement plans had to be developed. Parents worked with District officials to hammer out these plans. The result for Davis was to make it into a bilingual magnet school. In the fall of 1981, Davis Elementary was reborn as Davis Bilingual Learning Center.

Today, in order for kids to graduate from Davis, they have to know both English and Spanish whether they are Hispanic or Non-Hispanic. Parents now place their kids on waiting lists hoping to get them into Davis for a bilingual education. From Bertha Rico's days to now, the school's attitude toward Spanish has changed dramatically. 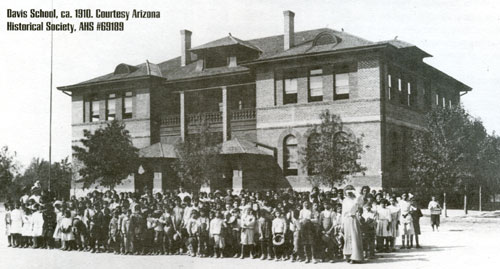