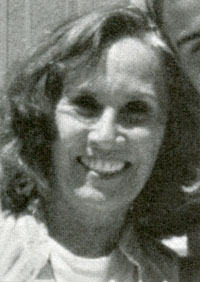 Barrio Anita Roots:
" My mother was always a Barrio Anita resident ... My maternal grandmother [Concepcion Gonzales] was the one that came from Mexico in 1923."

Were there any storytellers in Barrio Anita? There was always a storyteller from the Barrio. Sometimes they would be right there from the house, sometimes they would come from.... Barrio Libre, Sovaco.... They would sit outside and we [would] gather [and they] would have a fire.... We would hear all these stories, lots of ghost stories. We grew up always hearing te va a castigar Díos, God's going to get you... The second one was se te va a aparecer el Diablo which means the devil's gonna come, he's going to appear right there with his glowing eyes... whatever we did they always had those two sayings. La Llorona would get you right by the river... the Tejano with his treasure, I learned... all of these things, there was always a feeling of sharing, the oral tradition.

What was your childhood like? We were all of us real traviesos, monsters. We did a lot of bad stuff. We played hookie. In the old days there was a man on a horseback that would go get the people playing hookie... Then we used to start fires..so the fireman would come... We shoplifted from all over. We were very poor.... We would collect tadpoles when it rained right along the edge of the river.... We would go dump them in the swimming pool at Oury at night and then in morning, they're all dead, the Clorox in there, they're all floating, all the little tadpoles ... we had like hundreds of them dumped in there.

Who raised you? Let me tell you first of all, when I talk about ... the barrios and Barrio Anita, there's... a class structure... People who owned their homes, people that rented, people that had a Dad, people that didn't have a Dad... We were at the very bottom, we were the poorest of all, [the] very bottom of the social structure. We weren't allowed... in certain homes.... because they were the high class, we were not allowed to mix and play with them aquí. In this class structure, the married couple that was legally married and the father was gainfully employed.... they were the highest.... Then there were parents that were married, but there was an alcoholic Mom or Dad, they were kind of near the middle, [those kids] could kind of mess around with us....we were wild, we could do whatever.... Nobody knew where we were half the time. I could sleep at my Nana's, I could sleep at my sister's, I could sleep at my Mom's.

What kind of games did you playas a child? Oh, this is real involved... it's called "Agua te matarile rile rile." There are two rows. [One] row is the Mama with all her kids, and over there [as the second row] is one person. [Row one] Mom wants to offer [row two] one of her kids. This Mom says, Who do you want? This other one says, I want that one. Then this one says, What name will you give her? The other one has to think of a real poetic name, like Flor de Noche or Estrella del Cielo, you know, very, very, nice-sounding names.... The one that's offering the name comes and says, Los podremos Estrella del Cielo matarile rile rile... Then the other line comes back saying whether they like the name or not. [If they do like the name, they sing:] Este nombre sí le gusta matarile rile rile. Then the Mommy brings this little girl or boy to the [second row], and then [sings]: Aquí le traigo a mi hija/Con dolor de corazon/Bailaremos todos juntos/Con la cola de un raton! [Then you start] all over... until all the kids are over on the other side.

Did you play at Oury Park? Forever, that was the only [place] we had to play. I don't know if you're going to ask me later about segregation, but Estevan [Park] was considered the Black area and Oury Park was ours... everybody came [to Oury] for the ball games. [They were] official games, like leagues... Everybody played basketball on the courts. You lived at Oury Park, you always did. During [World War II] they were always serving... all the poor kids from Barrio Anita...sandwiches like peanut butter and jam...My Uncle... inaugurated Oury Pool. When they cut the ribbon, my Uncle was the best swimmer, so he took the first dive in it... It was the opening ceremony.

What is your happiest childhood memory? Some of the happiest memories... [have] to do with food because we were always hungry... One time they sent us to summer camp... all the poor kids ... it was somewhere on Oracle. That was a happy memory, but the horse scared the heck out of me. We got to eat all the food in the world... pancakes, French toast... You have to think, when you're poor, there's food that you haven't seen in your life. They were serving milk, pitchers and pitchers of milk... I have a lot of memories of food because I was always starving.

Do you have bitter memories about being poor? Yes. Like when I made my first communion they had to give me a voucher saying I was too poor, and they had to give me an outfit... [The other children had] the book and the candle, I didn't have any of that, they just dressed me up, that's it.

What year did you start Davis Elementary School? 1947. I remember they used to put everybody that didn't talk English in 1-C. I could talk English, but I still got stuck in 1-C... I don't know how we ended up there.

Can you tell us about 1-C? When something is real horrible, I think you block it out. I think I did a lot of blocking out with Davis... The worst punishment... was in [those days] we weren't allowed to talk Spanish....this was in the 1940s. You had to sit there for hours and write "I will not speak Spanish again on school grounds" or "I will speak English on the school grounds." Hundreds and hundreds [of times]... you couldn't go to recess, you had to write that....In the school grounds, if we would forget, you know how you get all excited playing, and you'd say [something and] it would come out Spanish. "Dame la pelota!" or something... We would turn around, and if they heard us that meant for sure we would be writing that English stuff... [You were always] supposed to raise your hand and say you want to go to the bathroom, that's one of the things you had to learn first... but some of the kids came [to Davis] that were already too old. They weren't put in 1-C, they were put in their regular grades. They didn't know one word of English. You had kids that peed in their pants because they couldn't ask [to go]... Those kids, I could tell you, a hundred percent of them didn't go on to school, didn't graduate, didn't go to high school.

Did your family raise their own food in Barrio Anita? Almost every family in Anita that I knew of had some kind of a garden. You have to remember... the groceries the Chinese owned didn't have a lot of fresh fruits and vegetables.... my Nana had two different gardens, she grew everything. Corn, squash, she had apricot trees, she had flowers... I would say that almost every house [in Barrio Anita], even the poorest house, had some kind of flowers.

Did your Nana or Mom make any special recipes? My grandma did miracles with nothing... she... could make at least four dinners out of one chicken for us. She had an expression... if somebody came to visit out of the [blue], she would say, más papas, más papas.... Then that means I had to go and make more papas. Everything got stretched with potatoes. And beans, you always had your beans... We had a wood burning stove, we didn't have gas... and before [Nana] got the refrigerator, we had the ice....you put a sign in your window facing the street, the sign would say like five, ten, fifteen, twenty, whatever, and [that way]... the delivery man would know how many pounds of ice you wanted.

What religion were you raised in? Catholic.

Was your family very religious? My grandma was. She had a manda... a promise to St. Jude that if she lived through her [hip] operation that... she would always have a... ceremony on the birth date of [Saint Jude]. She would put up an altar and all the relatives would come and they would leave him flowers, and they would pray all night, and she would do tamales, menudo, and the special prayer person would come from Nogales, and all her relatives... that was... like October 28. And she would say her Saint was St. Jude because he was the Saint of the impossible.

What do you think have been the biggest changes in Barrio Anita? Well, I drove up and down before
the interview and what I see [are] empty lots... and some prettied up homes... What was sad was the empty lots, because those were families that I remember... The house I lived in is gone, but the tree that I used to climb up is still there.

If you were writing a history of Barrio Anita what specific event do you think would be most interesting and important to include? What would you want everybody to know about Barrio Anita? I don't know what I would say, mijita, it's so hard. I'm very proud to be from Barrio Anita, I'm very proud, I just think that we suffered a lot.